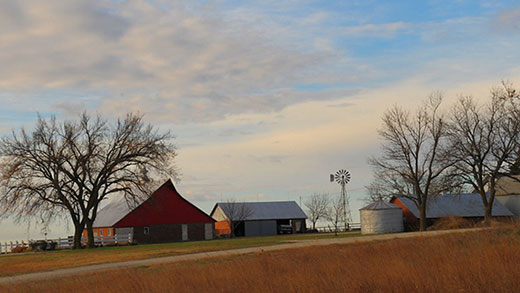 MANHATTAN, Kan. – Satellites, yield monitors and numerous other technologies have given farmers massive amounts of information about how crops perform on their land.

The challenge they often find, however, is how to make sense of that data.

Terry Griffin, a precision agriculture economist at Kansas State University, said yield maps – developed from the volumes of data collected in a field -- have become more common, providing guidance on soil moisture, yield and other characteristics of the land. But those maps are not enough.

“All of us who have been dealing with yield monitor data have been making maps for a few decades,” Griffin said. “But rather than a map of the yield for that field, we can convert that to a map of profitability, which then gives us site-specific information about whether parts of the field are profitable or not.”

Listen to an interview by Eric Atkinson with Terry Griffin on the weekday radio program, Agriculture Today

Profitability maps, he said, combine information on yield, sale price of the crop and the inputs applied to each section of a field. Maps are color-coded, clearly indicating to farmers what parts of their field are making money, losing money or breaking even.

“This is especially important when we are looking at profitability maps over time,” Griffin said. “One year may be an anomaly, but if we see certain parts of the field that are unprofitable year after year, then we have information to make different long-term decisions, especially if our land rental agreements are conducive to do so.”

Simply put, profitability maps allow farmers to target the use of inputs in a way that will make the most money. For example, using information from a profitability map, a farmer may choose to apply fertilizer only in sections where soil conditions are conducive to growing successful crops. Doing so reduces inputs and the area that an applicator has to travel to nourish that field.

Farm mapping software – some of which farmers already own -- can help them build their own profitability maps, Griffin said. The challenge, though, is getting accurate data on yield, fertility, inputs and crop prices.

Yield monitors, which allow such farm equipment as combine harvesters or tractors to gather information as they go about their work, should be properly calibrated to account for such things as the combine speeding up or slowing down, or running on a hill side.

Information on inputs, particularly when a farmer is using a third-party to apply variable rate applications, can be much more difficult to collect, according to Griffin.

“One of the things I’d ask farmers to consider, as part of the agreement with your service provider, is to receive not only a map on paper, but also receive the electronic data from the as-applied applications for your record, and for the ability to create the profitability maps,” he said.

Griffin was recently featured in a podcast from the University of Nebraska in which he talked in-depth about profitability mapping. A link to that podcast is available online through K-State’s Department of Agricultural Economics.

More information on precision agriculture and profitability also is available online from K-State Research and Extension.

Precision agriculture technology provides farmers massive amounts of data, but making sense of that information can be a challenge. K-State's Terry Griffin explains the value of profitability maps.

“All of us who have been dealing with yield monitor data have been making maps for a few decades. But rather than a map of the yield for that field, we can convert that to a map of profitability, which then gives us site-specific information about whether parts of the field are profitable or not.”