There are two legendary football coaches who are retired and living in Manhattan, Kansas. One is Bill Snyder, a multiple-time national coach of the year and a member of the National College Football Hall of Fame.

The other is a legendary high school football coach who led his team to the longest winning streak in the nation while coaching in rural Kansas.

Roger Barta is the retired high school football coach who set these records in Smith Center, Kansas. His accomplishments were so noteworthy that an East Coast writer spent a year in Kansas to write about them. In 2010, the book chronicling these achievements was published.

Roger Barta and his wife Pam grew up in the rural community of Plainville, population 1,903 people. Now, that’s rural. In high school, Roger played quarterback but couldn’t continue football due to injury. After graduating from Fort Hays State and earning a master’s in Georgia, he embarked on a high school teaching and coaching career. In 1987, he took his first and only head coaching job in Smith Center.

That was the beginning of a phenomenal career. Roger Barta built a coaching staff and a power football system which would develop into a juggernaut, with tremendous community support.

His won-loss record was excellent, and then came the streak of consecutive winning games. One win turned into two, and then five and 10 and more. A state championship was achieved, and then another and another.

One day in 2007, the Smith Center Redmen played Plainville and got on a roll. A series of Plainville turnovers and Smith Center offensive strikes snowballed into a rout. In a set of circumstances that Coach Barta regrets today, the Redmen scored 72 points – in the first quarter. This broke a national record set back in 1925 and propelled Smith Center into the national spotlight.

One of the national sportswriters who followed this story was a New York Times reporter named Joe Drape. He visited Smith Center to report on it and found himself intrigued with this remarkable coach and community.

Joe returned to New York, but something about the community stayed with him. He thought about Coach Barta and the lives the coach had touched. He thought about the winning streak and the challenges of the upcoming season, after a highly touted senior class graduated.

Joe had the unlikely idea to move his wife and young son from New York to Kansas for a year to follow the football season. He did so and chronicled the remarkable season that followed.

Coach Barta shaped this group of unheralded underclassmen into a powerful team once again. After some early-season close calls, the team came together and finished undefeated with Smith Center’s fifth consecutive state championship. Eventually, the winning streak would extend to 79 games – the longest high school victory streak in the nation.

The best-selling book is titled “Our Boys - A Perfect Season on the Plains with the Smith Center Redmen.”

“Our Boys” is about rural life as well as football. In the end, the book is about Coach Barta and the values he instills. Coach Barta teaches the simple values of hard work, dedication and love. “We talk about getting a little better each day,” he said, “about being the best we can be, about being a team.” He tells his players, “We need to respect each other, and then like each other, and then love each other. And when we have chemistry, that’s when together we are champions.”

Coach Barta said, “None of this is about football. What I hope we’re doing is sending kids into life who know that every day means something.” After retiring, Coach Barta and Pam retired to Manhattan.

Hard work, high values, and getting better every day. That sounds like another legendary coach who is retired and living in Manhattan. We commend Bill Snyder and Roger Barta for making a difference in their community and in the lives of so many young people.

And there’s more. Roger’s son Brooks would follow in his father’s footsteps of outstanding coaching. We’ll learn about that next week. 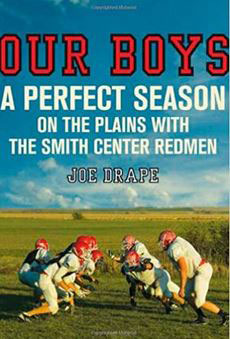 "Our Boys," a book about coach Roger Barta | Download this photo

When Roger Barta became the head football coach at Smith Center, he started building a program that would eventually set the record for the longest high school winning streak in the nation. It would inspire a New York Times writer to pen the best-selling book, “Our Boys.”