During the last two weeks, we’ve learned about the Barta family and their success in Kansas football. Today, in the conclusion of this three-part series, we’ll learn about the youngest branch on this football family tree. Many thanks to K-State Sports Information and writer Austin Siegel for the following information.

Mason Barta is the son of Brooks and Tonya Barta and the grandson of Roger and Pam.  He grew up at Holton where he was coached by his father and finished his high school career as the top-ranked outside linebacker in the state of Kansas. When it came to his collegiate football career, his father’s alma mater, Kansas State University, was one of the obvious choices.

Mason Barta remembers climbing the steps of the old Vanier Family Football Complex when he was a kid. His dad seemed to know everyone in the building. After his dad renewed old acquaintances, Mason walked into coach Bill Snyder’s office for the first time.

“(Coach Snyder) hung up the phone when my dad came in and we just sat down and talked about life,” Mason said. “I thought that was amazing. This program doesn't forget about the guys that come through here.”

“We wanted Mason to choose what was best for him," Brooks Barta said. “Of course, as his parents we were just excited because he was going to be close to home,” Brooks said.

It also made for some interesting phone calls as Mason Barta adjusted to the demands of Big 12 football and a coach with Big 12-level expectations for his players.

“I would call home and be like, ‘Man, Coach Snyder is really on me this week.’ Stuff like that," Mason said. “And my dad would be like, ‘I know exactly what you're talking about.’ But it built a lot of character and it was cool to experience the same things that my dad went through.”

Mason continued to excel after coach Snyder retired and Chris Klieman took the helm as head coach. As a fullback and blocker, Mason was a key contributor to K-State’s running game. In 2019, he helped K-State achieve 178 rushing yards per game, fourth-highest in the Big 12, and helped the Wildcats score 29 rushing touchdowns, the third-highest in the Big 12.

He contributed again in 2020, helping propel K-State to a 55-14 victory over KU. One special highlight was in the Oklahoma game when he made the swing-out block that sprung Deuce Vaughn loose for a game-tying touchdown. That would prove to be one of the defining moments of an upset over the third-ranked Sooners.

Mason definitely adds to the hometown Kansas flavor of the K-State program. He is one of 54 Kansans, more than double the number of players from anywhere else in the country. Of course, his hometown is Holton, a rural community of 3,329 people. Now, that’s rural.

Mason also has a unique perspective on how his father and grandfather didn’t just coach football but prepared their players for life. “They want to coach their players to not just be good football players, but to be men of faith and family,” Mason said. “I know that my grandfather and my dad really coach that family aspect.”

This concludes our three-part series on the Barta family of Kansas football fame. We commend Roger, Brooks and Mason Barta and all their families for making a difference in football and in life. This family tree has deep roots in football. 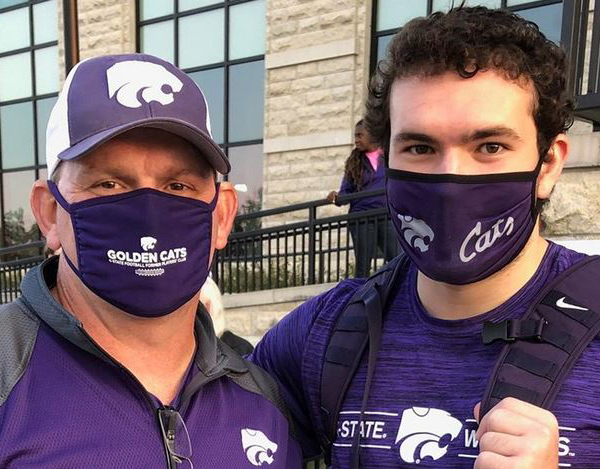 From left, Brooks and Mason Barta | Download this photo

As the top-rated high school linebacker in the state of Kansas, Mason Barta had the opportunity to follow in his father’s footsteps at K-State. He did so and, like his dad, has had success on the field and in the classroom.