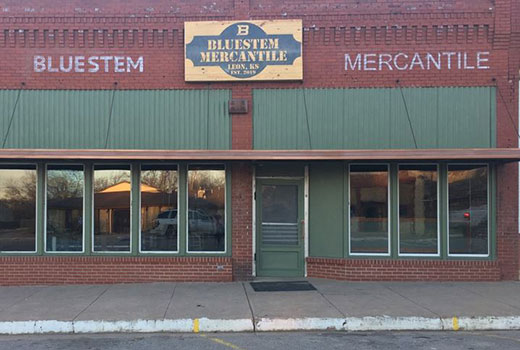 What was in your school classroom? I remember desks in straight rows, colorful posters on the wall, and a big blackboard up front. Today we’ll meet a school that has such classrooms, but also non-traditional places of learning such as a working barn and a downtown business. These innovative projects are being implemented by a school district in rural Kansas.

Joel Lovesee is superintendent of USD 205, which includes the Bluestem schools in Leon, Kansas. Joel grew up in Kinsley and went to Fort Hays State University where he met his wife Sonya. He became a teacher and later a school administrator. In 2008, he and his family moved to Leon where he became school principal. He was promoted to superintendent in 2013.

He takes an innovative approach to school leadership.

“My dad owned some pizza restaurants in Kinsley and nearby towns,” Joel said. “I saw how small business worked and thought our school should have an entrepreneurship program.”

One year he got the school to give a grant to the business class for a project. The students bought a couple of candy machines and, in four months, repaid their loan and made a profit.

A couple of elementary school teachers in the district took an interest in the Ag in the Classroom program, which helps teachers integrate information about agriculture into their educational programming. Fourth grade teachers Barb McCaffree and Angie Greene took this on as a project at Bluestem Elementary School and got a positive response to their efforts to improve ag literacy.

“My philosophy is, ‘surround yourself with good people and get out of the way,’” Joel said. When these teachers came to him and reported their success with the ag literacy program, they asked for a barn as a facility to do more hands-on experiential education.

“We brought in a 3D model to show the school board and explained the need,” Joel said.

The board and the community voted to pay for the building, which is a 30 x 40 foot climate-controlled structure with working space, livestock stalls and a fully equipped classroom. Today, every elementary school student in the school district goes through an agricultural education unit. “This has grown like gangbusters,” said school board member Becky Wolfe.

At Bluestem High School, an agricultural education class was started four years ago and has grown quickly. “FFA is now our largest club,” Joel said.

Joel continued to pursue an entrepreneurship-oriented initiative as well. After the town’s only grocery store closed, food access was identified as a critical need. Joel proposed the innovative idea of a school-operated retail store that could provide groceries and other products for the community. The district was able to acquire a storefront building downtown in 2019. K-State’s Rural Grocery Initiative helped support the effort.

In early 2020, the Bluestem Mercantile store opened in downtown Leon. “We want to provide a service and achieve the educational needs of our students,” Joel said. The shop class built tables for the store. Art club members made items to sell. The store is operated by the high school business class under adult supervision. Student workers must apply and go through a job interview process. “We’re teaching financial literacy,” Joel said. Business quadrupled shortly after the store first opened. “It’s not costing the school district anything,” Joel said.

Bluestem Mercantile offers school gear, items handmade by students, and grocery products. “The store is downtown across from the senior center and the café,” Joel said. “We have all these people from the community involved with us. It’s been the greatest deal.”

Are these innovations more practical to implement in a small school? “I don’t like the bureaucracy in the large schools,” Joel said. “I love small-town America.” Leon itself is a rural community of 704 people. Now, that’s rural.

Bluestem schools have plenty of classrooms, but they are also educating their students in innovative places such as an ag barn and a business downtown. We salute Joel Lovesee and the people of Bluestem School for making a difference with these new ways of education. They are doing so in innovative rooms and with a lot of class.

As a young man growing up in rural Kansas where his father owned a business, Joel Lovesee saw the importance of entrepreneurship and small business ownership. As an educator and school superintendent, he was able to implement entrepreneurial programs that provided a community service and hands-on educational experiences for his students.