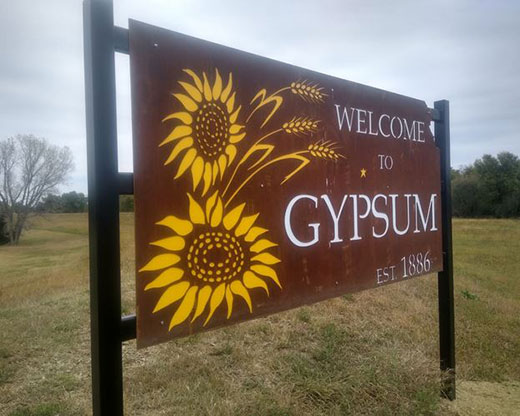 Can first impressions lead to changes in communities? Yes, based on the experience of one rural community that used the First Impressions program as a springboard for strategic actions to make community improvements.

Gary Olson is an entrepreneur, farmer, and real estate broker in Gypsum, Kansas. He grew up on a nearby farm and now produces seed wheat and has a real estate company. He’s also seen the struggles of rural communities. “Our town had about died,” Gary said.

In January 2019, he bought a building in downtown Gypsum and revitalized the flea market which had been operating there as a place for vendors to sell various products. Some are original custom products, such as from a nearby welding shop. Others are used or repurposed products that can be purchased affordably. People can sell items on consignment or donate them. “Our customers say they find hidden treasures here,” Gary said.

Resa Risinger is now the flea market manager. She noted that the market offered special promotions during the holidays such as a drawing for a free turkey and three hams.

“(The market) has grown exponentially,” Gary said. Promoting it on social media and allowing credit- and debit-card purchases has made a big difference. “Sales went through the roof,” Gary said. “Our guest book says that we’ve had visitors from as far away as California and Michigan and Sydney, Australia.”

Through another Gypsum resident, Leslie Manning, Gary learned about the First Impressions community-betterment program. First Impressions is offered to communities at no cost by K-State Research and Extension.

The purpose of the program is to build awareness of a community’s strengths as well as areas of concern, using feedback from outside the community. Once a community chooses to participate, a team of trained volunteers from a similar town will visit the community and record its impressions of various community elements, such as:

The results are presented at a community meeting.

Gary Olson and Leslie Manning were among those who went to a presentation to learn about the First Impressions program. They helped encourage the city of Gypsum to participate in the program. “A team from Glasco came down and gave us feedback,” Gary said.

Such outside perspectives can be useful in seeing one’s community through the eyes of a first-time visitor. In the case of Gypsum, this led to community action. “The next logical step was a program called Strategic Doing,” Gary said. “The extension office helped us organize a brainstorming meeting.” Facilitator Betty Johnson helped the community organize task forces to work on top priority issues, such as youth development, parks and recreation, and senior housing.

One prominent project was a new “Welcome to Gypsum” sign. “That sign was in the works for several years. Sandy Kruse worked on it,” Gary said.

New owners have purchased the restaurant, and other new businesses have opened. “We’ve opened a business center at the flea market,” Gary said. Strategic Doing has also led to the creation of the Gypsum Valley Community Foundation Fund, which has already raised more than $20,000.

“We’ve come a really, really long way,” Gary said. “Without those two programs (First Impressions and Strategic Doing), we wouldn’t have the community we do.”

It’s great to see such progress in a rural community such as Gypsum, population 405 people. Now, that’s rural.

We commend Gary Olson, Resa Risinger, Leslie Manning, Sandy Kruse, and the many other volunteers who are making a difference by building business and bettering the community. They are making an excellent impression.

And there’s more. Remember the welding company that made and sold the custom items? That small-town shop has big capabilities. We’ll learn about that next week.

Gary Olson revitalized the flea market in his hometown of Gypsum, and then joined other volunteers in using the K-State Research and Extension First Impressions program to gain outside perspectives on needed community improvements. This led to a Strategic Doing initiative that is leading the process for change in the community.