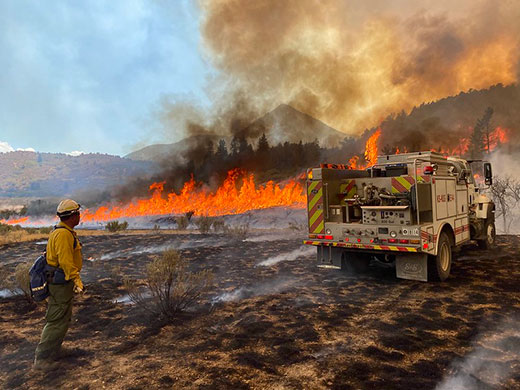 The Kansas Forest Service is among the agencies that assist in responding to wildfires in the state and around the country. The photo above shows KFS Engine 44 helping during the Pine Gulch Fire in Colorado last year.

MANHATTAN, Kan. – A swing to drier weather patterns and higher winds this spring is likely to increase the risk of wildfires in parts of Kansas, according to a recent report from officials with the Kansas Mesonet, a network of 70 weather stations throughout the state.

Chip Redmond, the manager of Kansas Mesonet, added that the expected weather conditions combined with an above normal amount of grass loading – or fuel – has increased the potential of fire in south central to northwest Kansas.

“The weather pattern is anticipated to transition toward La Niña and become conducive to dry frontal passages by early March,” Redmond writes in a recent forecast of the potential for spring wildfires. “With recent drought in the western part of the state, these areas are likely to expand because precipitation trends statewide are below normal through most of spring, a time of more critical importance for annual moisture totals.”

Redmond writes: “This is poor timing. The combination of warmer and drier weather with increased frontal passages will coincide with what we typically consider the fire season in Kansas.”

Many of the state’s historically large fires have occurred due to strong front systems like those expected this spring, according to Redmond.

Eric Ward, an assistant fire manager officer with the Kansas Forest Service, said his agency is preparing for what could be an active spring for the state’s 600-plus fire agencies and more than 10,000 firefighters.

“I would say, at this point, our preparations are pretty typical for what we do ahead of each season,” Ward said. “The Kansas Forest Service and our state and federal partners are here to support as needed, such as by our contract with Tanker 95 to provide aerial fire suppression.

“We also have agreements with the Kansas Ag Aviation Association, whose members can provide smaller aircraft to assist, and the Kansas Army National Guard has provided helicopters with buckets a number of times to support firefighting efforts.”

Ward says the Kansas Forest Service – in addition to providing firefighting support – fills a role to provide information to partner agencies, local fire departments and the public to help them prepare for potential fire events.

“We’ve also met with our counterparts in Oklahoma to be better prepared for cross-border fires like we’ve seen in recent years,” Ward said. “We provide training, equipment, grant funding and other direct services to local fire departments to help them prepare, since they are primarily responsible for fire suppression in Kansas.”

He added that residents are also part of the effort to prevent widespread fire.

“There are two major things people can do,” Ward said. “First, prepare your property to be able to withstand fire. In a major wildfire, there aren’t enough fire engines to protect every home, so the best defense is to make sure the property can withstand the fire unprotected.

Ward said the Kansas Forest Service advocates prescribed burning as a land management tool, “but it is essential that in planning a burn, property owners carefully check the National Weather Service Fire Weather Forecast, not only for the day of the burn, but 2 to 3 days beyond. A fair number of fires get started when a person burned on a nearly perfect day without realizing that a day or two later was going to be hot, dry and windy. Then, an ember blows out and creates a major fire.”

Redmond noted one good way to reverse the current fire danger is to get more precipitation, which not only provides moisture to Kansas lands, but also helps grass to green up faster – reducing available fuels.

“Precipitation timing is critical, and if consecutive storm systems can impact the region with widespread moisture in mid- to late-March, it could drastically enhance green-up and aid in diminishing fire concerns,” Redmond said.

The Kansas Forest Service is the nation’s fifth oldest state forestry agency. The agency serves rural landowners, communities, rural fire districts, forest and arboriculture industries, and citizens of the state through its Conservation Tree and Shrub Planting, Fire Management, Community Forestry, Rural Forestry, Marketing and Utilization, and Forest Health programs. The Kansas Forest Service state office is located in Manhattan, Kansas, just west of the campus of Kansas State University. The Kansas Forest Service is housed as an independent agency within K-State Research and Extension. The agency receives its direction from a mission statement that reads: “Care of natural resources and service to people through forestry.”

A swing to drier weather patterns and higher winds this spring is likely to increase the risk of wildfires in parts of Kansas, according to a recent report from officials with the Kansas Mesonet.

“The Kansas Forest Service and our state and federal partners are here to support as needed… We provide training, equipment, grant funding and other direct services to local fire departments to help them prepare, since they are primarily responsible for fire suppression in Kansas.”