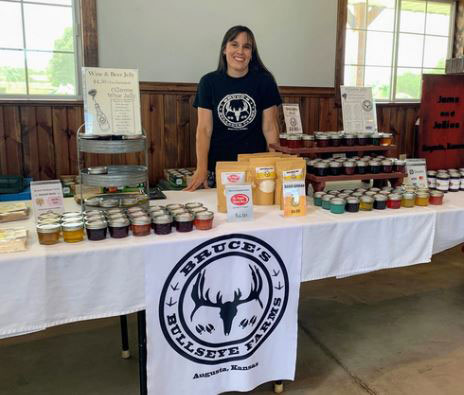 Bullseye! That’s what we say when we hit the target right in the center. Today we’ll meet a couple of first-generation farmers who are using the name Bullseye and hitting their target of producing and marketing value-added agricultural products.

Laurie and Joel Bruce are the owners of Bruce’s Bullseye Farms near Augusta. Laurie grew up at Potwin. She met Joel while working in El Dorado, and they married, moving to follow his job in the pipeline industry.

“We came back to Kansas,” Laurie said. “This is where we wanted to put down our roots.”

Joel got a job with Kansas Gas Service. After being a stay-at-home mom, Laurie earned an education degree at Wichita State and became a teacher.

They knew they wanted to live in the country. In 2000, they bought a house and one acre in Butler County. In 2013, they bought an 80-acre tract and expanded that a few years later.

“We got a horse and did hay and crops on shares with a neighbor,” Laurie said. That first horse was named Bullseye. “He was a great horse,“ Laurie said. “Now we have a small cowherd.”

Joel and Laurie were befriended by an older lady living nearby. “She gave me some sand plum jelly,” Laurie said.

“I told her, ‘That’s the best jelly I’ve ever had.’ She asked me if I’d like to learn how to make it and I said, ‘Sure,’” Laurie said. “She showed me everything, from how to pick them, how to clean them, how to process them, and even where to find them growing wild.”

In 2016, Joel and Laurie moved to the farm outside Augusta. She continued to make sand plum jelly.

Soon after that, a friend of Laurie’s invited her to sell some of her jelly at a fall pumpkin patch nearby. “Oh no,” Laurie said. “I’ll just come give some away.” Her friend insisted that she would set up a table and Laurie should come try to sell her product. “I brought 50 jars of sand plum jelly and two dozen loaves of pumpkin bread, and I sold out of all of it,” Laurie said. “That’s when I realized there was demand for these types of products.” She started making other types of jams and jellies as well.

Laurie and Joel launched their own value-added products business. They decided to name it Bruce’s Bullseye Farms, in honor of their first horse and the fact that Joel is a hunter. In their early days of marriage, Joel’s deer hunting helped put meat on the table.

Laurie wants to promote other entrepreneurs as well. She offers other people’s products such as local honey and BBQ sauce. She also assembles and ships gift baskets.

The Bruces continue to expand their business. They’ve purchased a commercial building in nearby Leon. In addition to the wild sand plums, Laurie purchased 65 sand plum bare root trees from the Kansas Forest Service and planted them orchard style.

“We want to sell everything we can from our own farm,” Laurie said. “We want to offer farm-to-fork food products.” Their business benefited when listed on the Shop Kansas Farms website during the pandemic. They have also joined the From the Land of Kansas program of the Kansas Department of Agriculture.

“We’ve shipped products coast to coast, from California to Florida,” Laurie said. It’s an impressive record for a woman from the rural community of Potwin, population 449 people. Now, that’s rural.

Bullseye. That was the name of the Bruces’ first horse and it became the name of their business. We commend Laurie and Joel Bruce for making a difference with value-added entrepreneurship. I think they’re hitting the bullseye.

A neighbor gave Laurie Bruce a jar of homemade wild sand plum jelly and Laurie thought it was the best jelly she’d ever had. After learning how to make this jelly, Laurie and her husband Joel Bruce have developed a value-added ag products business selling jelly and other homemade products across the nation.