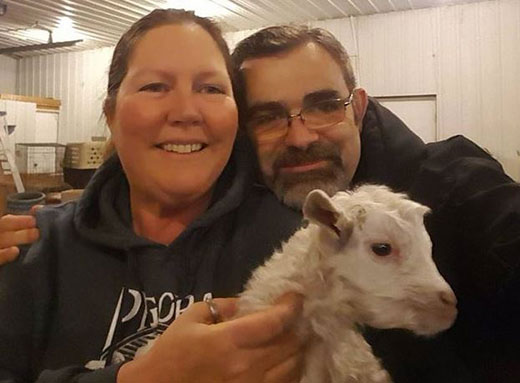 Left to right: Collen and Mike McGee (and Iona the goat) | Download this photo

Would you like to hear a yarn? Today we’ll meet a Kansas family that has established a farm of specialty animals producing fiber that can be woven into yarn and other products.

Collen and Mike McGee are the owners of Rowantree Farm near Abilene. Collen grew up in Washington state, served in the military, and joined the civil service after military retirement. Then she met and married Mike, who also served in the Army.

Collen and Mike decided they wanted a more rural lifestyle, so they found a place to live outside of Abilene. It had a building and livestock pens where they began their farm. The McGees named their farm Rowantree Farm, which is a play on Collen’s maiden name of Roundtree.

“We wanted animals that fit our size and age,” Collen said. In other words, they wanted animals that had value but were smaller and more manageable than big cows, for example. Specifically, they are raising Pygora and Cashmere goats and Babydoll Southdown sheep that produce high quality fiber. They also raise chickens and eggs.

Pygoras are sometimes called “the versatile goat with the luxurious coat.” Pygora goats are a cross between pygmy goats and angora goats. They are specifically bred to produce fine cashmere fiber for hand spinning.

Southdown sheep originated in the South “Downs” of Sussex County, England, and came to the United States in 1803. Through the years, they were bred for larger size and meat production. Babydoll Southdowns are the small-framed, diminutive version of the breed that resemble the original sheep from old England. These sheep will be 18 to 24 inches tall when full grown. Babydoll wool blends especially well with Pygora and cashmere fibers.

“My mom had owned a yarn shop in Washington state after my dad retired,” Collen said. Producing fiber allowed Collen to reconnect with these roots.

“There is a resurgence in fiber arts,” Collen said. “Gen Xers and Millennials want to be makers of real things.” Collen and Mike shear their sheep and goats to harvest the fiber for processing and use. “My husband started playing with it and found he liked it too,” Collen said. “He’s now the dye guy.”

The McGees sell yarn, eggs, fiber for spinning, drop spindles and needle felting kits. In non-pandemic times, they host school tours and daycare groups at the farm. They are also working on opening their own fiber mill and on-farm store. “There’s room in the industry for another mill, because there are six- to nine-month delays in getting fiber processed,” Collen said. Rowantree Farm is a member of the From the Land of Kansas program sponsored by the Kansas Department of Agriculture.

In January 2021, Collen helped start a Kansas Fiber Producers Association that meets as a Facebook group. This umbrella group is composed of producers who harvest fiber from a variety of animals such as sheep, goats, alpacas, llamas and rabbits.

In early May, the group is planning its first-ever Homestead Hop for people to visit various farms and see local, small producers. For more information, watch for upcoming posts about the Homestead Hop on Facebook Group’s page and the Rowantree Farm page on Facebook.

The story of the McGees is not just any yarn. It is the true story of a couple who started their own farm to grow fiber which could become spun into actual yarn. Now they are adding value by reaching out to other fiber producers and starting a mini-mill of their own. We commend Collen and Mike McGee of Rowantree Farm for making a difference with their fiber farm and fiber arts. I’m glad that they can weave these ideas together.

Collen McGee’s mother had a yarn shop where she grew up in Washington state. When Collen and her husband Mike settled in Kansas, they decided to grow animals that produce fiber to be used in yarn and other products. Now she’s raising fiber goats and sheep and leading efforts to promote these fibers.