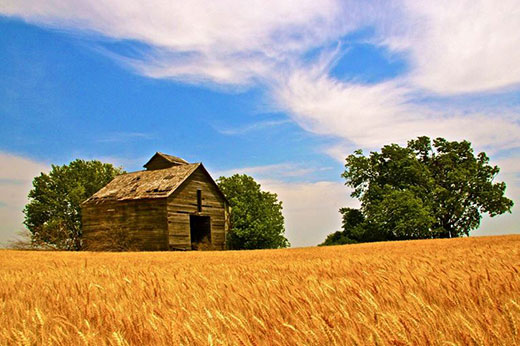 Lights, camera, action! The cameras roll as the actors say their lines, and the commercial is recorded. That’s a frequent occurrence in a Hollywood studio, but this filming took place in a rural Kansas barn.

One day in 2013, Kevin learned of an unusual request. Marci Penner’s Kansas Sampler Foundation and the Kansas Barn Alliance sent the word that a New York film director was looking for a picturesque barn in which to film a Coca-Cola commercial. People were encouraged to submit photos of suitable barns.

Kevin realized that he and Julie had a photo of a barn which would be ideal. The photo had been taken when Kevin was out for a ride in Dickinson County with Julie and her father and stepmother, Larry and Donna Schlappi. “We were drivin’ down some road and as we drove by this barn, Larry said, ‘Hey Julie, your grandfather and your great-grandfather and I used to farm that land and we used that barn,’” Kevin said.

Kevin took a picture of it. It was a classic Kansas scene: A weathered wooden barn, surrounded by a field of golden wheat.

When the call came for photos, Kevin submitted his barn picture. Out of 2,000 barn photos, the picture that was selected was Kevin’s.

The script for the commercial described a little boy and his grandfather, going into an old barn on a hot summer day. The grandfather shows the boy an old, beat-up Mustang automobile. The two work on restoring the Mustang while, of course, consuming some tasty bottles of Coke. The next scene, presumably years later, features a grown-up young man walking into the barn to see the beautiful, fully restored candy-apple red Mustang. He takes it for a drive, while drinking another bottle of Coke. He glances at a black-and-white photo hanging on the rearview mirror, showing him and his grandfather together. The commercial ends with an aerial view of the Mustang zipping along the wide-open country roads.

Zach notified Kevin Kirkwood that the exterior of the barn looked ideal for filming. Unfortunately, the inside of the barn was a different story. The interior needed major renovations for the barn to be workable.

Kevin tracked down the barn owner, Lonnie Heigele who lives at the nearby rural community of New Cambria, population 126 people. Now, that’s rural. Lonnie gave permission for the renovations because the project would help the students at the film school.

Kevin, Julie, and friends set out to make the renovations. It was like an old-fashioned barn-raising, with volunteers pitching in together. Others donated props, including a beautifully restored Mustang.

In three days during 2014, Zach. Luke, and seven New York film students filmed the video in the barn in Kansas. In the end, Coca-Cola did not purchase the commercial, but the students received an invaluable experience. In 2015, the commercial was revealed at a special announcement in Chapman.

Zach stated at the announcement that he was blown away by the hospitality and support which he found in rural Kansas. Folks in Kansas even helped out when Luke’s own car broke down. “This (project) took months and months of work and dedication and the unbelievable, indescribable generosity of the people in Kansas,” Zach said. You can watch the complete commercial on YouTube.

Lights, camera, action! The cameras rolled to film the commercial in a Kansas barn. We commend Kevin and Julie Kirkwood and all those who made a difference by making this happen. As a director might say: That’s a wrap.

When a New York film producer was looking for a picturesque barn in which to stage a commercial, Kansas photographer Kevin Kirkwood submitted the barn photo that was selected. Kevin and Julie even helped renovate the barn in which the commercial was filmed.