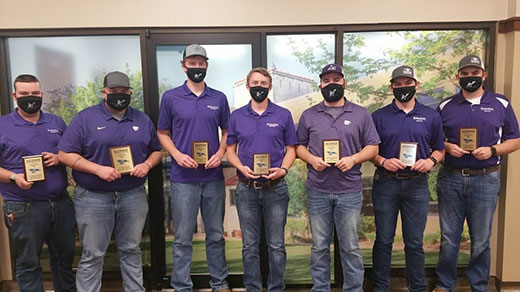 After a halt to judging contests in 2020, K-State continues its win streak

The squad jumped back into in-person competition this spring after a pause caused by the COVID-19 pandemic in 2020.

Ryan, who is from Solomon, Kansas, and Kirchhoff, from Hardy, Nebraska, grabbed the top two individual spots, but were followed closely by teammates Evan Bott (junior from Palmer, Kansas) in fourth and Trevor Mullen (junior from Salina, Kansas) in twelfth.

This was the second spring competition for K-State’s team. At the regional contest in March, K-State placed second to Iowa State. Ryan and Kirchhoff also swept the top two individual spots at regionals.

Last fall, K-State’s crops team won a virtual crops contest held online during the national meeting of the Students of Agronomy Soils and Environmental Sciences. Ryan and Kirchoff swept the top two spots and Madison Tunnell (senior from Overland Park, Kansas) placed fifth. Tunnell graduated in December and did not compete with the team this spring.

The team is coached by K-State professor of agronomy Kevin Donnelly and graduate student Sarah Zerger.