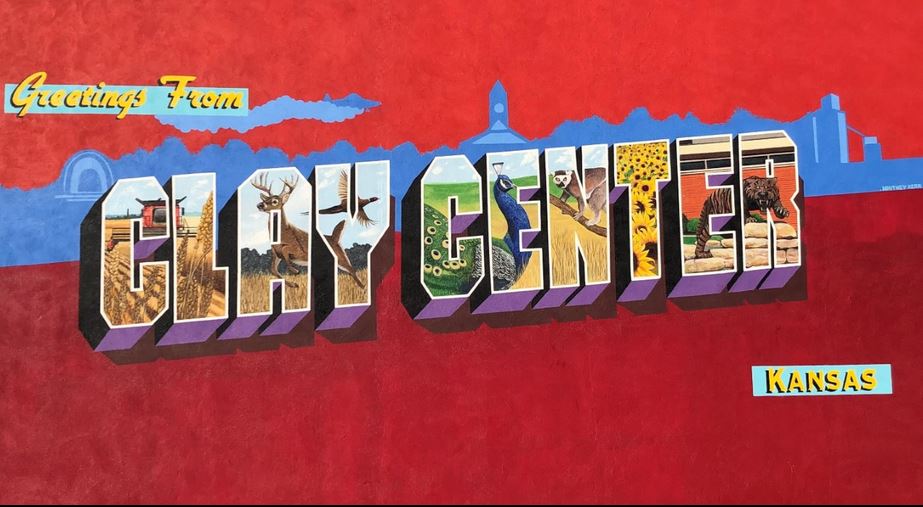 There’s a fever which has begun in a Kansas community. Don’t worry, this is a good kind of fever. It is what one artist described as “mural fever,” where a community put up a mural and that led to another mural and then another. These murals have improved the downtown appearance and sparked new interest in the community.

Brett Hubka is community bank president in Clay Center, president of the Clay Center Rotary Club, and the person who launched the initial idea for a mural in his community.  Brett has rural roots, having grown up in Medicine Lodge. His mother is from the rural community of Sharon, population 158 people. Now, that’s rural.

Brett attended Kansas State University, where he met his future wife who is from Oberlin. They married and moved to Oklahoma where she attended optometry school. She joined a practice in Clay Center where Brett came to work in the bank. “Rural Kansas is important to us,” Brett said. “This is where we want to raise our kids.” Brett’s parents, Mike and Elene Hubka, are educators who now live in Manhattan.

After moving to Clay Center in 2015, Brett was elected president of the local Rotary club in 2020. “Every president does a community project. I tried to figure out what to do,” Brett said. He remembered that, a few years ago, a K-State architecture and design student team had proposed a downtown Clay Center plan which included a mural on one downtown building. The idea appealed to Brett, and he proposed to his Rotary club that they put up a mural. Just one.

Another Rotarian, Kyle Bauer, suggested that the club put up one mural and be open to putting up more, depending on the interest. He and others told Brett that money would come if the idea was a good one. Sure enough, the idea took off. Brett asked a cross-section of people from the community to serve on a seven-person mural committee.

The local community foundation, an affiliate of the Greater Manhattan Community Foundation, was having a community-donation match day and invited them to participate. Brett said with a smile, “I wanted our project to be at the top of the list alphabetically so I thought it should start with the letter ‘A.’” The committee named the project “A Mural Movement.” It generated $15,000 in donations.

Because Clay Center is located on K-15 highway, the first mural design was a collection of Kansas license plates placed together and painted to resemble a giant K-15 highway sign. Another early mural resembled a giant postcard with the message “Greetings from Clay Center.”

“The project snowballed from there,” Brett said. “We fell in love with it and the artists fell in love with being here,” he said. People in the community donated additional funds.  “That one mural turned into a dozen within 11 months,” Brett said. There have now been 215 donations amounting to $147,000 to support the murals. Thirteen different artists have been involved.

Most of the murals are in downtown and more are under way. A huge mural is planned to go on two sides of the Key Feeds building. The themes of the murals range from books at the library to cute puppies to a tribute to first responders to Farm to Table.  One, a tribute to veterans, depicts the flag-raising at Iwo Jima and extends to an actual flag flying at the top of the building.

“We put QR codes by the murals where people could scan and get more information, and those have been scanned hundreds of times,” Brett said. Social media posts have received thousands of views. “Our artists call it ‘mural fever,’” he said.

“We have a lot to offer in Clay Center, and this gives people a reason to stop,” Brett said.  For more information, visit A Mural Movement Experience for an interactive map of all the murals, social media links, a donation page and more.

A fever has popped up in this rural community. Fortunately, it is a fever of interest in these community murals. We commend Brett Hubka and all the volunteers and donors who have made a difference by brightening the community for visitors and residents. I hope this fever spreads.

When Brett Hubka was looking for a service project for his year as Clay Center Rotary Club president, he remembered that a K-State architecture team had recommended a mural downtown. He proposed that his club put up a mural, and it was so well received that the one mural turned into a dozen within 11 months.