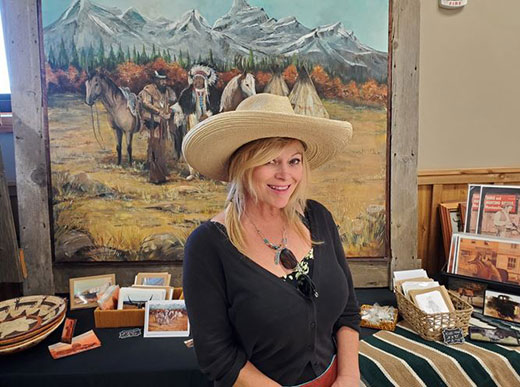 It was the opening scene of the TV show “Gunsmoke.” Marshal Dillon stepped into Hollywood’s version of Dodge City’s Front Street for a quick-draw showdown with an unnamed gunman. That unnamed gunman was in fact a technical advisor for many major western stars. His daughter, an accomplished artist, would eventually find her way to the real Dodge City in Kansas.

Inga Ojala is an accomplished artist and art teacher. She is the daughter of Arvo Ojala, the gunman from the opening scene of “Gunsmoke.” Arvo Ojala’s parents immigrated to the U.S. from Finland and settled on a ranch in Washington state. It was rugged country. Arvo said he learned to shoot by shooting the heads off rattlesnakes. That would certainly provide an incentive to shoot quickly and accurately!

By the early 1950s, Arvo was working as a Hollywood stuntman. He observed the cowboy movie stars and designed a special type of holster which enabled them to draw their guns more quickly. Arvo practiced his skills to the point that he could draw in one-sixth of a second.

He became a technical advisor to western film stars such as James Arness, Paul Newman, James Garner, Ronald Reagan, Kevin Costner, Marilyn Monroe, Natalie Wood and more. He advised Michael J. Fox for the gun-handling scenes in “Back to the Future III.” While Arvo had speaking roles in some movies, his most-commonly viewed scene was as the unnamed actor who faced Marshall Dillon in the opening scene of “Gunsmoke.”

Arvo also met and married a Norwegian actress, artist, model and figure skater named Doris Naga Seversen. They would have five children, one of whom is their daughter Inga. She followed in her parents’ footsteps. As an artist, she sold her first piece at age 15, had one of her works of art in a gallery at age 18, and was teaching art by age 20. As a child model, she was pictured on the Northern toilet tissue package and in ads for Wonder Bread. Like her father, she enjoyed the outdoors and western life.

In Hollywood, Inga appeared in movies such as “Fast Times at Ridgemont High” and TV shows such as “The Love Boat” and “Fantasy Island.” In the movies, she did stunt work on horses and motorcycles and was handy with a bullwhip. She does gun tricks and mounted shooting.

Today, Inga is an artist and teacher. She paints, draws, carves and sculpts.

In 2005, Inga represented her father at a 50th anniversary “Gunsmoke” reunion in Dodge City. Inga returned for more reunions in subsequent years.

As the people in Dodge City learned of Inga’s artistic abilities, they asked her to use her talents on projects in Kansas. Since then, she has taken on numerous creative and restoration projects in the region. At the Dodge House hotel, for example, she created an 84-foot-long mural, a replica of the “Gunsmoke” set, and an outdoor waterfall. Inga did the restoration work on the La Salsa Man and Mobile Man sculptures. She has done murals at the Dodge City Zoo and in St. John, with more projects pending.

After repeated trips to the state, Inga has settled in Kansas where she teaches art and works on projects. She lives near Dodge City, in the rural community of Bucklin, population 794 people. Now, that’s rural.

Also a baker, Inga owns a Scandinavian catering business and is finishing a Scandinavian bread baking book. In summer 2021, she plans to offer a pioneer cooking show on YouTube.

For more information, go to www.ingaojala.net.

The opening scene of “Gunsmoke” is over. James Arness as Marshall Dillon has won the showdown with the unnamed gunman. In real life, that expert gun-handler would advise Arness and others how to improve their quick-draw abilities. Decades later, his daughter would find work and a home near the real Dodge City in Kansas. We commend artist and teacher Inga Ojala for making a difference with her creativity and talent. Just as Arvo Ojala was an expert at drawing a gun, daughter Inga is an expert at drawing and painting artwork.

Inga Ojala is an artist and art teacher. She grew up on the west coast where her father was a stuntman and quick draw consultant for Hollywood westerns. After representing him at TV show reunions in Dodge City, she eventually settled in southwest Kansas where she continues to practice her artistic career.