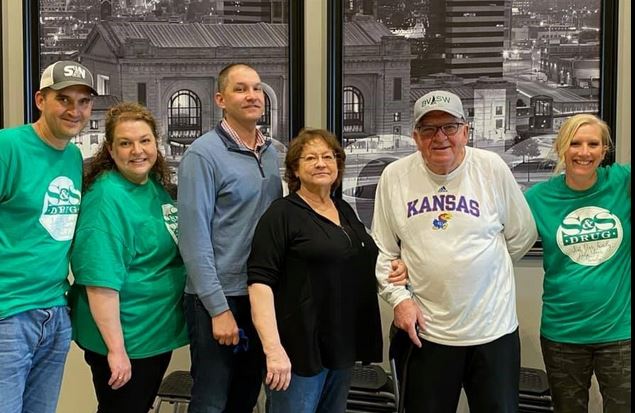 “Giving back.” The term is frequently used, but what does it mean in practice? Today we’ll meet a family-owned pharmacy where the people have a longtime commitment to giving back to their rural community.

Heather Johnson is the CEO of S&S Drug, a family-owned pharmacy in downtown Beloit. S&S Drug has served north-central Kansas for more than 100 years. In 1986, Max and Michele Heidrick purchased the drugstore, and it has been in their family ever since. Their daughter Heather grew up in the business.

Heather went to Kansas State University, where she earned a bachelor’s degree in elementary education and later got a master’s in special ed. She married Jim Johnson, who had grown up in neighboring Jewell County and earned a degree in agribusiness. After graduation, they moved to Norton, where Heather taught and Jim worked in a bank until he went to law school at the University of Kansas. In 2005, they moved back to Beloit, where Jim joined the law practice of attorney Curt Frasier. In 2007, Heather took a position as bookkeeper at her family’s business, S&S Drug. Heather and Jim also had three children.

“Over the years, my dad and I have kind of switched roles,” Heather said. “Now I’m doing the management, and he’s enjoyed becoming a professional grandpa,” she said with a smile.

S&S Drug has two businesses, a full-service pharmacy and a home-health supply store.  The businesses are located across the street from each other in downtown Beloit.

As a businessperson, community member, and mother of three, Heather felt strongly about enhancing the quality of life in the community. “I focused on things I enjoyed as a young child,” Heather said. “I wanted those same opportunities for my kids and their friends.”

This was based on values that Heather had learned from her parents, who had also been deeply involved in the community. “That’s how we were raised,” she said. “My mom and dad were doers.”

As a result, S&S Drug has been a longtime sponsor of community and youth activities in Beloit. S&S Drug and the Heidrick and Johnson families are involved in supporting lots of different activities for virtually every major holiday.

They helped organize and sponsor the Easter egg hunt, for example, where as many as 600 children participate, and everyone gets a prize. At Christmastime, they help sponsor the annual visit by Santa Claus to downtown Beloit, complete with crafts and cookies. The list goes on and on.

“When we first moved back (to Beloit), there were Fourth of July fireworks at Waconda Lake,” Heather said. When funding ran low and the organizers got tired, the fireworks were discontinued. “North-central Kansas went a year without fireworks, and we felt that had to change,” Heather said. Her family solicited funds, and more than $10,000 was raised to bring back the annual fireworks display. As of 2021, the local chamber now operates the fireworks show.

“When my kids were little, I took them to the Beloit city pool,” Heather said. “It had been built in the 1940s and was leaking and costing the city a lot of money.” She saw the need, set up a committee, researched the topic and led a drive to fund a new aquatic center. Voters approved a sales tax increase for the project. Beloit became one of the first rural Kansas communities to construct a large water park.

“It’s been a great draw,” Heather said. “There was a village here that helped raise me and my siblings. Someone needs to carry on those traditions.”

That type of commitment to community is vital in rural places such as Beloit, population 3,835 people. Now, that’s rural.

For more information about the community, go to www.beloitks.org.

“Giving back.” It’s more than a concept for Heather Johnson of S&S Drug, who is making a difference by enhancing the quality of life in her community. She not only moved back, she is giving back.

And there’s more. The second element of this story has to do with COVID-19. We’ll learn about that next week.

When Heather Johnson and her husband moved back to her hometown of Beloit and had the chance to join her family’s pharmacy business, she wanted her children to have the benefits of small-town life that she had enjoyed growing up. Now that she is CEO of the family business, she is leading many efforts to benefit the community as her parents had done before her.