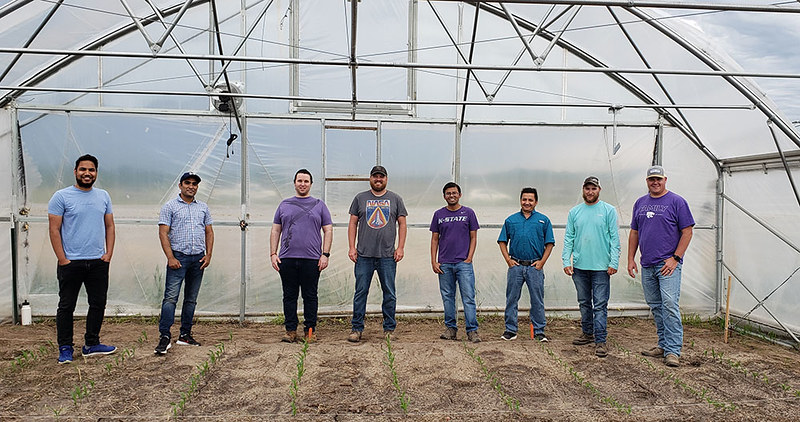 A Kansas State University research team led by Krishna Jagadish (pictured fourth from right) is using climate-controlled tents to study the effect of high nighttime temperatures on corn, wheat and other crops. | Download this photo.

MANHATTAN, Kan. — Warmer nights can upset a good night’s sleep for humans, but could the biological processes of farm crops be fussy about nighttime temperatures, too?

Researchers at Kansas State University and North Carolina State University think so, and they’ve got a growing amount of evidence to prove that the circadian clock genes in rice -- and possibly wheat -- get messed up when nights get hotter.

“We still don’t know all the details, but we’re narrowing down the key regulatory players,” said Colleen Doherty, an associate professor of biochemistry at North Carolina State University.

Doherty and K-State professor and crop physiologist Krishna Jagadish began studying the impact of nighttime temperatures seven years ago when Jagadish worked at the International Rice Research Institute in the Philippines.

In field trials with rice, Jagadish used artificial heaters in field conditions to maintain experimental plots at 2 degrees Celsius above ambient temperature, and compared samples – taken every three hours for 24 hours -- from plots that were grown at ambient temperature.

Similar studies at K-State have indicated a 5% reduction in wheat yield for each one degree Celsius increase in temperature, according to Jagadish. For wheat, he added, “these changes in grain composition under warming nights will impact both the quantity and quality of bread.”

“Most people think plants aren’t dynamic, but they are,” Doherty said. “Plants are constantly regulating their biological processes – gearing up for photosynthesis just before dawn, winding that down in the late afternoon, determining precisely how and where to burn their energy resources. Plants are busy, it’s just difficult to observe all that activity from the outside.

“And what we learned is that the clock responsible for regulating all of that activity gets messed up when the nights get hotter relative to the days.”

Doherty is currently focusing her work on rice, while Jagadish has studied the impact of nighttime temperatures on rice and wheat. “Rice and wheat behave similarly to warming nights, so progress made with one crop can benefit the other,” Jagadish said.

The researchers’ goal is to better identify the factors that create havoc with the plants’ circadian rhythms so that scientists can breed varieties that perform better under conditions where higher nighttime temperatures are present.

“Corn, for example, has very high levels of starch. We believe that with warmer nights, we will lose starch, so the grain quality and quantity of biofuel that can be generated from corn will be negatively impacted. In other words, with the varieties we have now, warmer nights could have negative impacts on both the food and biofuel industry.”

In a 1,200-page report released in 2019, the United Nations linked a rise in global temperatures to increasing pressure on fertile soil, jeopardizing the world’s food security. Jagadish and Doherty note that rice, wheat and other cereal crops feed hundreds of millions of people around the world.

The research is supported by the USDA’s National Institute of Food and Agriculture (NIFA). The researchers have published a paper that discusses their work with. Warm Nights Disrupt Global Transcriptional Rhythms in Field-Grown Rice Panicles appears in the June 2021 Proceedings of the National Academy of Sciences of the United States of America, known familiarly as PNAS.

Research at Kansas State University and North Carolina State University have built a growing amount of evidence to prove that high nighttime temperatures affect rice, and possibly other cereal crops such as wheat.

"Plants are constantly regulating their biological processes – gearing up for photosynthesis just before dawn, winding that down in the late afternoon, determining precisely how and where to burn their energy resources…And what we learned is that the clock responsible for regulating all of that activity gets messed up when the nights get hotter relative to the days."