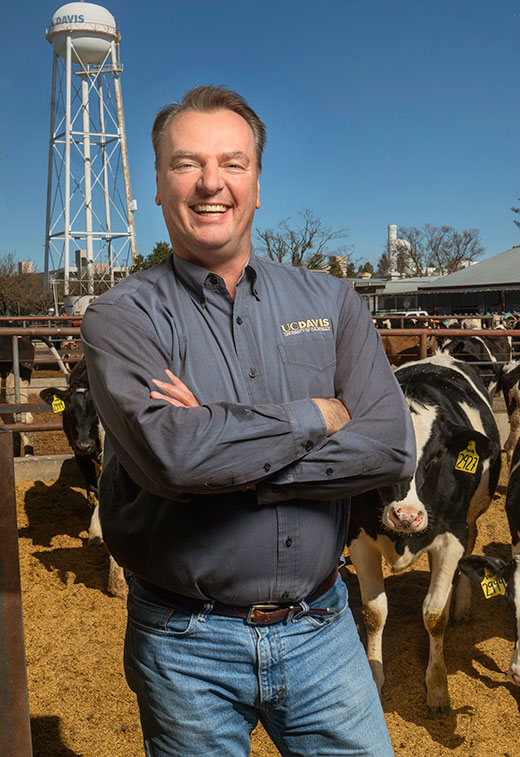 Frank Mitloehner, an air quality specialist at the University of California-Davis, will present the lecture, Rethinking Methane: Animal Agriculture’s Path to Climate Neutrality, on Oct. 11 at K-State. | Download this photo.

Save the Date: Livestock sustainability researcher to give Gardiner Lecture Oct. 11

MANHATTAN, Kan. – Frank Mitloehner, a professor at the University of California-Davis who has spent nearly two decades studying the relationship between the livestock industry and air quality, will be the featured speaker for the Henry C. Gardiner Global Food Systems lecture Oct. 11 at Kansas State University.

“One of the most important aspects right now in and around livestock is its impact on climate,” said Mitloehner, who is also director of the CLEAR Center, which conducts sustainability research on animal agriculture.

“There is this notion out there that the impact of animal agriculture on the climate is tremendous. We have actual data that shows what the impact really is, and we can share with the audience what beef, dairy, pigs and poultry emit, and what we can do to further mitigate those emissions.”

Mitloehner said understanding the impact of livestock emissions on the climate is more complex than is often understood.

“When you read the newspaper, you frequently see global averages being quoted, but a global average really doesn’t tell you anything,” he said.

“If I were to ask you what the emissions of a car is, you would ask me to be more specific. A car driven where? By whom – an 18 year old or an 80 year old? Does it run on electric or on diesel gasoline? What’s the make and model? And on and on.”

“Everybody understands that specificity is needed when it comes to vehicles. For some reason, they don’t get it when it comes to cattle. A steer in the United States is totally different compared to a steer in Ethiopia or Australia and other places. In our work, we explain to people the level of specificity that is needed, and what processes we need to get into to really get specific answers that address the questions that people have.”

Once livestock emissions and mitigation processes are better understood, Mitloehner said the world can move closer to turning what can be viewed as a liability into an asset.

“When you reduce a gas like methane, for example, something really beautiful happens,” he said. “You can actually pull carbon out of the atmosphere, which can have a positive impact on our climate.”

“So,” Mitloehner adds, “educating farmers and ranchers how to reduce their impacts can reduce overall warming impacts and can lead to the opposite: a cooling effect. This will be surprising to many, but this is something that we have figured out and are capable of communicating pretty effectively.”

Mitloehner said the CLEAR Center’s work also focuses on the welfare of animals and humans within the livestock system.

“We don’t want to just be efficient and grow those animals in as short of time as possible,” he said. “That’s important, but we also want to provide these animals with good welfare so that they only have one bad day in their lives. That’s something that is pushed very hard by the public – that we focus more on sustainability issues, including environmental quality – but also including animal welfare.”

He adds that one of the issues he hears from farmers and ranchers across the United States centers on employees. “They want to know how to attract and retain a qualified work force, one that is well-trained, well-motivated and stays in the business,” Mitloehner said.

“There’s a huge shortage of qualified and motivated people. If you don’t have good people that understand how to manage manure, feed, animals and so on, then everything falls apart. It’s critical.”

Mitloehner said the CLEAR Center’s research is communicated broadly. His team routinely writes a blog that covers livestock sustainability issues, and reaches up to 300,000 readers. A YouTube channel maintained by the Center regularly gets “hundreds of thousands” of views, he said, though a recent piece titled ‘Eating Less Meat Won’t Save the Planet’ was watched 2.5 million times.

“There are people interested in the intersection of livestock and the environment, and they want to hear from people who are not just tooting some propaganda, but who actually research these things,” he said.

Past speakers have included Robert Fraley of Monsanto, Greg Page of Cargill, Jay Famiglietti of the University of California-Irvine, Jason Clay of the World Wildlife Fund, and Sara Menker of Gro Intelligence.

The lecture series is funded by the Gardiner family of Ashland, Kansas. Henry C. Gardiner, who passed away just before the first lecture in 2015, was known as a visionary leader who dedicated his career to improving the beef industry through science and technology.

A University of California-Davis professor who has spent nearly two decades studying the relationship between the livestock industry and air quality will give the 2021 Henry C. Gardiner Global Food Systems lecture at K-State on Oct. 11.

“There is this notion out there that the impact of animal agriculture on the climate is tremendous. We have actual data that shows what the impact really is, and we can share with the audience what beef, dairy, pigs and poultry emit, and what we can do to further mitigate those emissions.”