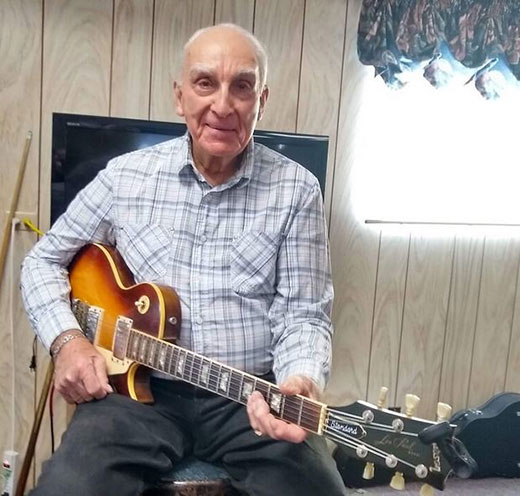 “Music helps to keep you happy.” If that’s the case, the person who said it has been happy for a long time.

Today we’ll meet a rural Kansas man who has turned 99 years old and is still playing music. Thanks to Marilyn Jones for this story idea and to writer Julie Govert Walter and the North Central Flint Hills Area Agency on Aging for their related article.

Bob Delk turned 99 years old in August 2021. He grew up north of Peabody where he attended country school at the unincorporated community of Aulne, which today has a population of perhaps 50 people. Now, that’s rural.

After graduating from Peabody High School and getting married, he moved two miles north and two miles west of the place where he grew up and started farming with his wife’s family. “I did mechanic work, all the things a farmer has to do,” he said. He lived on that farm until 2016 when he moved to a house in Hillsboro.

Bob grew up in a musical family. “I idolized my dad,” Bob said. “He played violin and guitar. When I was 12, I decided I would like to play too. My dad showed me a few chords on a ukulele.”

The year was 1934. Eighty-seven years later, Bob is still playing.

In the early years, the Delk family had their own music group. Bob learned to play four string banjo and guitar. Father John played guitar and violin.

“My sister Betty played the piano and my mother Lydia played the flat guitar which is now called the dobro,” Bob said. They played at churches, schoolhouses, and community events in the region. Bob’s favorite musical group growing up was Bob Wills and the Texas Playboys.

The group’s first gig was at the Marion County Fair in 1943. They performed at many communities across Kansas, including the Kansas State Fair. The group became widely known in central Kansas – so well known, in fact, that they attracted the attention of a namesake group in Texas.

“There was another group called the Plainsmen Quartet,” Bob said. “They wanted to sue us for taking their name but then they found out we had the name before they did, so we never heard any more about it.”

Later, Bob formed his own group called Bob and the Boys which lasted for some 25 years.

In 1976, Bob bought a Gibson Les Paul guitar that he still plays. Now he joins in jam sessions at the Hillsboro Senior Center and has played at the farmer’s market in Peabody.

Guitar is his instrument of choice. He plays songs from various genres such as gospel, big band, and country-western. He is not a singer but an instrumentalist. “I’ve always been part of a group,” he said. He has traveled with various groups throughout the central U.S, among them the Singspirationals and the Menno Brass Ensemble.

Bob and Aldene farmed and raised four children. In 1999, after 54 years of marriage, Aldene was killed in a tragic auto accident near Herington.

Bob later married Dorothy. They would travel to various festivals and events all over the U.S. and beyond. Before she succumbed to cancer in 2017, Dorothy would travel with Bob to south Texas in the winter where he would jam several times a day with musicians there. Bob now lives in his own home at Hillsboro and continues to drive.

The family musical tradition continues. “Some of my grandsons and great-grandsons play guitar and other instruments and sing, and my nephew plays keyboard and trumpet,” Bob said. “I love music, I love people and I love to visit.”

“Music helps to keep you happy,” Bob said. We commend Bob Delk and his family for making a difference with his musical talents. He’s been playing music and making people happy for a lifetime.

People say learning to play music is a life-long skill. Retired farmer Bob Delk is an example, having learned to play guitar as a youth and still playing at age 99.