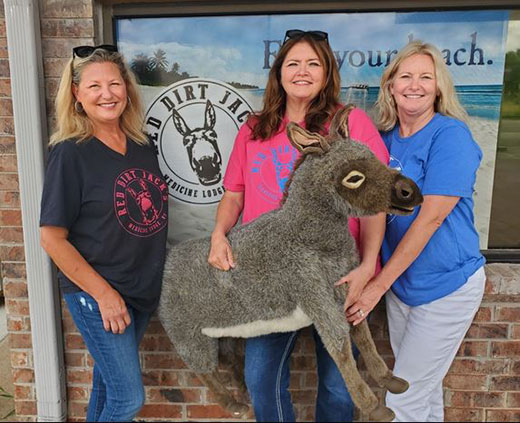 That sounds like something a teenager might say, but in this case, I did get to know Jack. What’s more, I got to know the three creative women who are with Jack. They are utilizing his story to promote their business and their community, and having a lot of fun in the process.

These three women and a fourth sister, Kim Fowles, are the Hoagland sisters. They were raised on the family ranch in western Barber County. “We call it red dirt country,” Marsha said. The ranch is near the unincorporated rural community of Lake City which today has a population of perhaps 20 people. Now, that’s rural.

They grew up here, went to school in Medicine Lodge and on to college. Marsha went to Wichita State and had a career in finance. Her husband’s family owned a convenience store in Oklahoma for many years.

Diane became a dental hygienist in Wichita. She and her husband retired to Medicine Lodge in 2016.

Rhonda went to K-State. After her husband passed away, she recently remarried.

After many years, the sisters are all back in Medicine Lodge. In January 2020, they had an opportunity to buy the local convenience store. “This was just a dowdy little place,” Marsha said. These three sisters went together to buy it and worked on upgrading it. Then they had to decide what to name the store.

Years ago, Rhonda had been at a charity auction where she purchased a stuffed donkey that was the size of a large dog. She nicknamed it Jack. What does one do with a large stuffed donkey? “I tried giving him away, but somehow he kept finding his way back,” Rhonda said.

As the sisters discussed what to name the store, their cousin suggested they name it for Jack. Because of the location in red dirt country, they named it Red Dirt Jack’s. Jack became the mascot for the business.

The sisters took Jack with them on a trip to Utah and had a lot of fun en route. “By the time we got to Lakin, Kan., Jack had his own Facebook page,” Marsha said.

Jack continues to post on social media and has become quite the celebrity. He has his own wardrobe, appeared in wedding photos and parades, and traveled as far away as Florida. On the first day of school at Medicine Lodge, he was pictured in his backpack at the school crosswalk. He waits patiently at the store and is available for photos.

Someone said that this was a genius marketing ploy. “No, it was a fluke,” Marsha said with a smile.

While the sisters have a lot of fun with Jack, they have significantly upgraded the store. That was no fluke. They refurbished the building, added an industrial kitchen, cleared a lot next door for parking, doubled the cooler space and added a deli and more food options. There are salads and made-to-order sandwiches and small booths for sitting.

“We are not a restaurant; we are a gas station with food,” Marsha said. Their daily lunch specials have become very popular. “We use our grandma’s recipe for meat loaf,” she said.

Their Monday Chinese food special can have people waiting in line outside the door. Other specials include homemade lasagna, pulled pork, spaghetti, patty melts and half-pound hand-patted cheeseburgers.

What has all this meant to the community? “There was no gathering place in town,” Diane said. “Maybe this community needed Jack.” Customers have told them how much they appreciate the sisters.

“We love Barber County,” Marsha said. “We are part of the community and we want to give back.”

“You don’t know jack.” Well, now you do. We commend Marsha Hoagland, Diane Johnson and Rhonda Gabriel for making a difference by investing in their community and serving their customers with excellence - and, with Jack.

When the Hoagland sisters moved back to the Medicine Lodge area where they grew up, they purchased a convenience store and whimsically named it Red Dirt Jack’s in honor of a stuffed donkey that they had received. Now Red Dirt Jack’s is providing meals, and serves as a fun gathering place for the community.