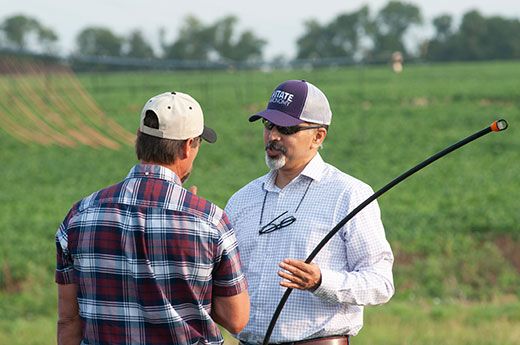 Raj Khosla, professor and head of K-State's Department of Agronomy, is a co-leader on a $10 million grant project that will study uses of artificial intelligence in agriculture in the Colorado River Basin. The researchers hope to uncover new ways to use precision agriculture and decrease the natural resources footprint. | Download this photo.

MANHATTAN, Kan. – A Kansas State University agronomy professor says a six-state project to study precision uses of water, nutrients, salinity, and the incidence of pests in the Colorado River Basin is a good example of how agriculture’s future will include farming data as well as land.

Raj Khosla, who also is the head of K-State’s Department of Agronomy, co-leads a five-year $10 million grant awarded by USDA’s National Institute for Food and Agriculture to explore ways in which America’s farmers can help meet the year 2050 goal to increase food production by 40% while decreasing inputs – or the natural resources footprint – by 50%.

“That’s a tall order,” Khosla said. “Given our track-record we can cross the 40% mark (of increased production) in the next 40 crop seasons, but doing that with 50% less inputs, is going to be challenging.”

“For example, today a crop of irrigated corn takes about 2 acre feet of water to produce. In 2050 we would have to produce 40% more corn than we’re producing today with 1 acre foot less of water. That’s an uphill task.”

Khosla, who began as K-State’s department head for agronomy in January 2021, is a globally recognized authority on precision agriculture, having worked in that area since its inception. He is the founder and past president of the International Society of Precision Agriculture, and recently served as a member of the National Academy of Science’s Executive Committee on Science Breakthrough 2030.

His research program has used remote sensing and other geo-spatial tools extensively to enhance agricultural production, resource use efficiency, profitability and sustainability of managed agro-ecosystems.

The $10 million grant that Khosla co-leads (Elia Scudiero, a research agronomist at the University of California-Riverside, is the project director) aims to use new technologies to mine vast amounts of data from farmer’s fields, then use that information to apply water, fertilizer, pesticides and other inputs in a more targeted manner.

The area being studied – the Colorado River Basin – touches seven states, stretching 1,450 miles (including a 17-mile international boundary between Arizona and Mexico).

The Colorado River is a major renewable water supply in the southwestern U.S. Nearly two-thirds of the water flowing in the river is used for irrigation; the other one-third supplies water for urban areas. Khosla said researchers understand well that conserving water while increasing food production is a mighty task.

“This is where the 5 R’s of precision agriculture come into play,” Khosla said. “We are learning more about how to apply the right input, at the right time, at the right place, in the right amount and the right manner.”

“Those are the layman’s terms for what we need to do. But there’s a lot of science that has to go behind it.”

The USDA-NIFA grant, he added, will help determine the data needed to employ precision agriculture most effectively in farmer’s fields, as well as translate data into decisions that the farmer can understand and make on their own.

“The idea is to keep the complexity related to data collection, processing, and complex analytics to ourselves,” Khosla said. “We want to deliver a simple, precise, reliable and automated solution to the farmer.”

Ernie Minton, dean of the K-State College of Agriculture and director of K-State Research and Extension, said projects like the one that Khosla co-leads are critical for the future of agriculture.

“This project and others like it show the responsibility and care that farmers and agricultural scientists have for this industry,” Minton said. “I think we all know that we need to produce more food, but we want to do that in ways that protect resources and lifestyles. We’re on the right track.”

Researchers in six states are exploring ways in which America's farmers can help meet the year 2050 goal to increase food production by 40% and decrease inputs by 50%.

“We are learning more about how to apply the right input, at the right time, at the right place, in the right amount and the right manner. Those are the layman’s terms for what we need to do. But there’s a lot of science that has to go behind it.”