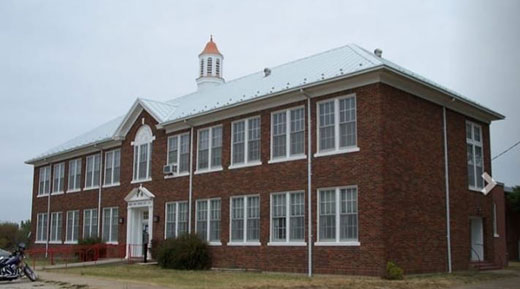 “Built to last.” That’s a phrase we often use to describe something built with the careful craftsmanship and solid materials of yesteryear – something that stands the test of time, like a solid old school building from decades ago.

Today we’ll learn about a group of volunteers who have taken such a building and repurposed it for their community’s modern use. Thanks to K-State’s Dr. Steve Smethers for this story idea.

Jack Donaldson is one of the founders of the community center in Kincaid. Jack grew up in the nearby community of Selma where he went to grade school. He went on to high school at Kincaid and married Ann who also attended Kincaid before the high school closed in 1967. At that time, it was converted to a junior high school which then closed in 2005.

Jack had a career in the trucking and construction industries. Then he and Ann opened a bed and breakfast in Moran. In 2016, they retired back to Kincaid.

After the school closed, the building had been purchased by a couple from Utah. They were unable to do anything with it and donated it back to the city.

The mayor approached Jack about the building, which remains city-owned. “It was built as a WPA project back in the ‘30s,” Jack said. “It was very sturdy, built to last.” For example, he said, “instead of 2 x 6 floor joists, it had full 2 x 16 floor joists.”

As president of the high school alumni association, Jack checked with alumni. They gathered the donations needed to pay back taxes and create a museum in the old school building. A volunteer board of directors was created to raise operating funds.

Today the Kincaid Community Center serves as the site of the city library, senior citizen nutrition center and community museum. “A lady named Jennifer Gum-Fowler took over the library in what had been the school library upstairs, and that’s now part of the southeast Kansas library system,” Jack said.

The large science and biology classroom has been converted to the museum for Kincaid, housing lots of artifacts from the community. “We have most of the annual yearbooks,” Jack said.

Artifacts donated for display include a 1936 baby buggy, a treadle sewing machine, quilts, old-time items such as feed sack dresses, a collection of fair books dating to 1909 and much more. Ann spent many days repainting rooms in the old building.

A smaller classroom has been converted into a museum for the even smaller rural communities in the region, including Selma, Bush City, and Lone Elm – population 25 people. Now, that’s rural.

The old ag classroom and shop is now an exercise room, complete with exercise bikes and other equipment. “The ag teacher had taken lots of pictures of his students’ projects,” Jack said. Those are now posted on the walls around the room. “There are probably more than 650 pictures.”

Meeting space is available for rent to the public. The former school kitchen is available for caterers. “We get some money from the township, but otherwise the museum has to support itself through donations and rentals,” Ann said. Several ladies clubs help raise money. “People are good about donating,” Ann said. “Everybody pulls together.”

The museum is open by appointment. “The city clerk will open the museum to the public when notified,” Ann said. “A lot of people have helped to do this,” Jack said.

For more information, search for the Kincaid Community Center on Facebook.

Built to last. That’s how Jack Donaldson described the structure of the old Kincaid High School building. Now he and others have helped convert that structure to a community center that serves the needs of the community today. We commend Jack and Ann Donaldson and the many other donors and volunteers who support the museum. They are making a difference that lasts.

And there’s more. Remember the collection of fair books dating back to 1909? Those fair books were from the free fair that’s been held in Kincaid for more than a century. We’ll learn about that next week.

By the time Jack Donaldson and his future wife, Ann, retired to Kincaid, their former high school had closed but the building was still in good shape. The Donaldsons and others worked with the city to repurpose the building into a community center that hosts a regional museum, library, senior nutrition center, exercise room and more.