The airline pilot happened to be in Amsterdam but he had a question. He sent a text to a friend and asked, “When is the world’s fair?” The friend texted the dates in his reply.

The pilot said, “Good, I want to be sure I make it back to Kansas for it.” The self-proclaimed world’s fair to which he referred is a remarkable community fair in rural Kansas.

Last week we learned about a century-long collection of fair books. Those fair books were produced for the annual Kincaid Farmers Free Fair, known today as the Kincaid World’s Fair or Kincaid Free Fair for short. Gary Holloway is the president of the Kincaid fair board.

From newspaper accounts, it appears that the first Kincaid fair was held in 1907. “Of my grandparents, one was 8 (years old) and the other was 5 (at that time),” Gary said. It began as a Farmer’s Institute and corn growing contest, in an effort by local businessmen to attract attention and generate business from the railroad.

Since that time, the fair has been held every year, except when cancelled due to World War II and due to the Covid-19 pandemic in 2020. This year, the fair theme is “110 years and going strong.”

Gary Holloway’s family was always involved in helping with the fair. He grew up on the farm near Kincaid, went away to college and worked in business before coming back to the farm. He and his wife raised two sons, one of whom went to K-State and is coming back to the farm with his family also. “My grandchildren will be the fifth generation to be involved with the fair,” Gary said.

“Growing up, my brother and I always had two of every kind of livestock,” Gary said. “One we sold at the county fair and the other we saved for the Kincaid fair.”

As president of the fair board, Gary works with experienced volunteers. “Dozens of volunteers make this possible,” he said. “Everybody knows what to do at the fair and they just do it. There’s no egos.”

“We have to have stuff for kids to enjoy,” he said. When the tentatively-scheduled 2021 carnival company cancelled, the fair board arranged for multiple bounce houses to be available for kids every night.

“We’ve had as many as eight marching bands in the parade from communities around the region,” Gary said. Thanks to sponsors, the entertainment is provided free to the public. “It’s called the free fair because we’ve never charged for entertainment,” Gary said.

Along the way, the fair began to be referred to as the world’s fair, and it brings people back to the community from all over. “This is the homecoming event that we come home to,” Gary said.

It’s amazing to find this in a rural community such as Kincaid, population 122 people. Now, that’s rural.

“This is a reunion,” Gary said. “These things were important to us growing up and we want our grandkids to have a great experience too.”

For more information, go to www.kincaidfair.com.

There was an airline pilot who grew up in this region and happened to be in Amsterdam when he texted Gary Holloway and asked about the world’s fair. Gary knew exactly what he meant. We commend Gary Holloway and all those involved with the Kincaid Free Fair for their commitment and community spirit. It makes a world of difference. 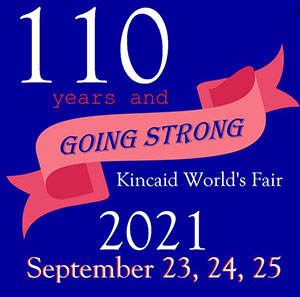 In 1907, city leaders of Kincaid sponsored a Farmers Institute, corn growing contest and free fair. Remarkably, the annual free fair continues today, and is sometimes referred to -- tongue in cheek -- as a world’s fair. Gary Holloway’s ancestors helped with the fair, which he enjoyed as a kid. Now he leads a group of volunteers who continue the fair more than 110 years after it began.