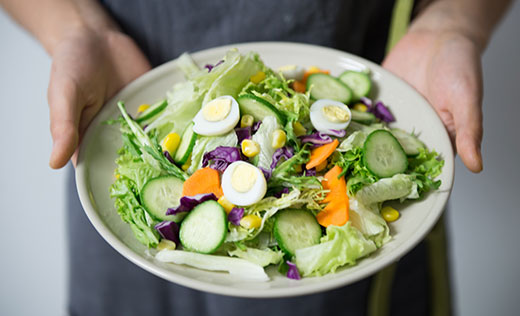 Cut the Salt: FDA’s push a boost for healthier hearts

MANHATTAN, Kan. – The U.S. Food and Drug Administration’s recent request for food manufacturers and restaurants to cut the salt in their products is a positive step toward reducing Americans’ risk of high blood pressure and heart disease, said a nutrition specialist at Kansas State University.

Sandy Procter said reducing salt intake by 12% over the next 2½ years – the FDA’s recommendation – “could save thousands of lives.”

“As a country…we typically take in too much salt on a daily basis,” Procter said. “For years, nutritionists have advised individuals to eat less salt.”

And now, she adds, the FDA is joining the push.

“This problem is widespread and it is beyond the individual’s capability to deal with,” Procter said, noting that putting away the salt shaker and limiting salt in cooking is not enough.

“For decades, nutrition professionals and educators have been urging people to use less salt. But that is not the message that is going to make a difference because there is so much salt in processed foods.”

The FDA reports that the average person in the U.S. consumes about 3,400 mg of sodium a day, approximately 70% of which comes from processed foods (not table salt). The goal is to reduce that average to 3,000 mg per day, though the U.S. dietary guidelines actually suggest 2,300 mg a day – equivalent to about one teaspoon of table salt.

Consuming too much salt is often associated with high blood pressure and heart disease. The U.S. Centers for Disease Control and Prevention lists heart disease as the leading cause of death in the U.S. for all adults.

Procter said consumers often don’t realize that many common foods contain sodium. As an example, she mentions a simple sandwich for lunch: “Deli meat with cheese on bread, and mayonnaise or maybe mustard…all of those foods have quite a lot of salt in them,” she said.

“We have become accustomed to salt in food, and our taste for it has increased as more of our foods are purchased ready-to-eat. It’s been added more and more by food processors throughout the years.”

The FDA’s recommendations are voluntary for food manufacturers and restaurants, but could promote changes at many popular fast food restaurants and food companies.

“Salt is one of those things we develop a taste for,” Procter said. “We can get acclimated to less salt, but it’s usually something that nutritionists recommend you do over time – don’t try cutting excess salt out all at once.

“If food industries would take it back gradually and lower the amount of salt, as a population we probably wouldn’t notice it in our food, and it would have far-reaching, positive health effects.”

Aside from changes potentially coming in the food industry, Procter said consumers can take steps to reduce their own salt intake, including:

“The amount of water that is retained in our bodies is due to a sodium-potassium pump,” she said. “Eating more fruits and vegetables really helps with increasing the potassium, which offsets the amount of sodium held in the body.

More information on healthy eating is available online from K-State’s Department of Food, Nutrition, Dietetics and Health, as well as from local extension offices in Kansas.

The U.S. Food and Drug Administration has asked food manufacturers and restaurants to cut the salt in their products by 12% over the next 2 1/2 years.

“We have become accustomed to salt in food, and our taste for it has increased as more of our foods are purchased ready-to-eat. It’s been added more and more by food processors throughout the years.”