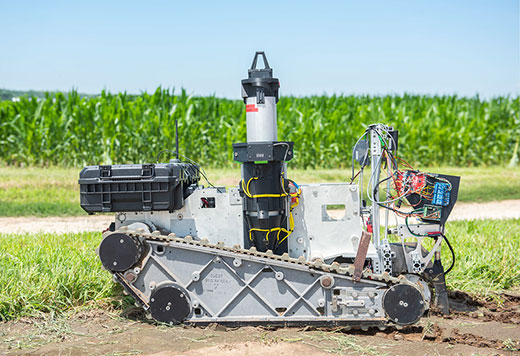 Researchers are using small, robotic vehicles -- similar to the one shown above -- to identify and treat pest infestations in farm fields. | Download this photo.

MANHATTAN, Kan. -- Autonomous pest control vehicles could become a valuable asset to farmers in the future as they create an opportunity for new intelligence and a way of managing pests in crop fields.

Kansas State University precision agricultural engineer Ajay Sharda says that small, robotic vehicles could identify sites of infestation, decide if it is beyond a critical level and whether it should be sprayed.

Currently, this technology is not ready for farmers, he said. “The component that is missing at this point is how do we infuse artificial intelligence to these machines.”

Specifically what’s missing, according to Sharda, is human eyes, intelligence, feelers, and knowledge – all important aspects if a farmer is considering placing many vehicles in the same field.

“I think these are technological innovations that need to be developed so we can present (this option) to our farming community,” Sharda said.

“When we are running one big sprayer it’s going to cover the entire field,” he added. But, “in the same 100 acres, if I’m running 20 small autonomous machines, I have to aggregate all that data on the fly to understand how I covered the entire field and how much pesticide I applied.”

Sharda said that when observing crops, he looks from the top to the bottom even though most crop infestations start from the middle or bottom. Autonomous vehicles have the ability to view the crop from the bottom to middle section.

“By spraying inside (the canopy), I have a microclimate that has lesser wind effect… and is a little bit cooler and damp,” Sharda said.

The vehicles can also spray much closer to the crop, allowing it to be more site specific on the plant.

“If I am spraying site specific, I’m saving a lot of chemical, which means costs are down” and the potential for those chemicals to reach nearby water bodies also is decreased, according to Sharda.

He said autonomous vehicles will have the ability to catch an infestation at the right time and be able to treat it before it damages a portion of the field.

“There are a lot of benefits from the standpoint of the environment and saving dollars,” Sharda said.

K-State researchers are studying the use of robotic vehicles to identify and treat sites of pest infestation in crop fields.

“There are a lot of benefits from the standpoint of the environment and saving dollars."