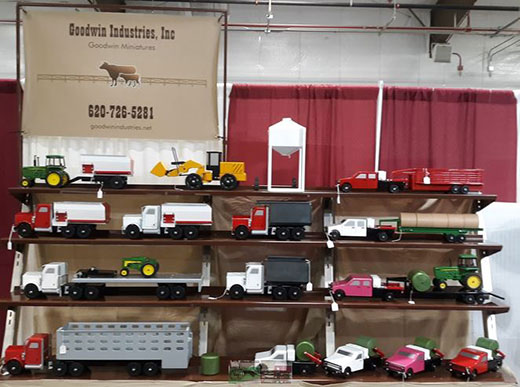 Would you like to buy a four-door truck for $180? How about a semi truck for $225? Maybe a stock trailer for $150? Those prices can’t be real, so you must know that I’m just toying with you.

Today we’ll meet an innovative Kansas company that has diversified its product line to include miniature-sized trucks and farm equipment -- toys that are being shipped coast to coast and beyond.

Larry and Teresa Goodwin are owners of Goodwin Industries in Burns. One of the company’s product lines is Goodwin Miniatures.

Larry grew up near Burns. He worked with his father, Ron Goodwin, who we previously profiled years ago. Ron produced a line of smokers for cooking meat.

“I learned the skill of welding from my dad,” Larry said. While in high school, he attended tech school in Emporia. Larry opened his own welding shop in Burns and did the manufacturing of the smokers that his father was selling.

In 2006, Ron retired and sold the smoker line. Larry’s business is now known as Goodwin Industries.

Goodwin Industries produces several products in addition to doing custom metal work. They now build another model of the family smoker. The company makes a corn header sweep to go on a combine to help with corn harvest. “We do custom work for individuals and other companies,” Larry said.

Larry and his wife have two sons and two daughters. Their boys, Dustin and Zac, are working in the business.

In 2012, Zac was in college at Pratt and was home for the holidays. With time on his hands, he went to the shop and built some miniature replicas of cattle pens and corrals.

“We were doing farm shows where we were displaying the smokers,” Larry said. “We brought some of the miniatures along and they sold really well,” he said. The Goodwins eventually added Goodwin Miniatures to their product line.

These miniatures are 1/16 scale handcrafted steel replicas of semi trucks, pickup trucks, trailers, and cattle working equipment. These are not cheap Made in China products. They are handbuilt in the shop and powder coated to last.

These miniature models include the types of products one might find on a working Kansas farm. In addition to the trucks, there is a grain bin, a flat bed trailer, a ground load trailer, a goose neck trailer, a stock trailer, a hay trailer, a mixer bed, a high loader, a cube box and a bale loader.

For the livestock operator, there are livestock panels, feed bunk, water tank, gate frame, alley, loading chute, squeeze chute, four way connector and a bale feeder. Items are sold individually or in sets. The panels actually connect so they can be arranged in countless ways.

These are considered generational toys. They are built to last and can literally be handed down from generation to generation.

“A customer told us they were at a wedding in Montana and the kids there were playing with our toys from the previous three generations,” Larry said. “They are built to last.”

In fact, he has his own built-in testing crew. “I have three grandboys so we let them play with the toys first,” Larry said. “They are my R&D department – that’s wreck and destroy,” he said with a smile.

Goodwin Miniatures have been shipped across the U.S. including Alaska, from coast to coast and as far away as Alberta, Canada. “It’s nice to do something that brings people joy,” Larry said.

Their high demand period is from September through December when Larry and his wife take these products to farm and craft shows before the holidays. “We get a really nice response from the people who get them,” Larry said.

It’s great to find this business in a rural community such as Burns, population 228 people. Now, that’s rural.

We commend Larry and Teresa and Ron Goodwin and Dustin and Zac of Goodwin Industries for making a difference with their creativity and craftsmanship. It’s good to see that miniature toys can produce giant-sized smiles.

Larry Goodwin learned to weld from his dad before attending tech school and then opening a custom welding shop of his own. When Larry’s son Zac was home from college during the holiday break, Zac welded together some miniature farm toys that have proven so popular that the Goodwins are shipping them across the nation and beyond.