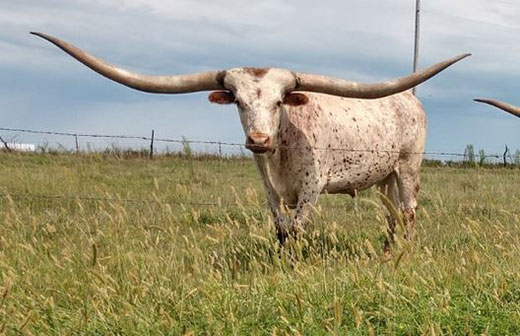 Today we’ll meet a family which is producing longhorn cattle that are setting global records.

Joe Sedlacek is the owner of Lazy J Longhorns near Greenleaf, Kan. He was born in the nearby rural community of Frankfort, population 726 people. Now, that’s rural.

Joe grew up around cattle as his father ran an Angus cowherd. But Joe became interested in another kind of cattle: Texas longhorns.

“I was always fascinated with longhorns,” Joe said. “I’d watch every old western just to catch a glimpse of a longhorn. If we were traveling and happened to see a longhorn, we’d have to stop and take a picture.”

In August, 1996 when Joe was 15, he bought three longhorns as a hobby. “By Christmas of that year, I had 50 head,” Joe said. That is definitely a hobby that grew. After graduation, Joe did accounting work to keep books for several companies while growing his longhorn herd.

“Those book-keeping skills would come in handy (for the longhorn business) because you have to track a lot of data and measurements,” Joe said. In 2005, he married Stephanie who had grown up in nearby Hanover. They bought ground and built a home near Greenleaf.

“I figured this could be a viable business if I could devote myself to it full-time,” Joe said. In 2008, he left another job to concentrate on his registered Texas Longhorn cattle breeding business. He called it Lazy J Longhorns.

The longhorn breed has rich history. After the Civil War, these hardy animals were running free in Texas, yet there was high demand for beef in the eastern markets. Entrepreneurial Texans gathered those longhorn cattle and drove them north to railroads in Kansas where they could be shipped to markets in the east. Of necessity, those animals learned to survive and raise calves in harsh wilderness conditions. Those traits of hardiness and mothering ability remain with the breed today.

The greatest fascination is with the huge horns that grow naturally on the heads of both males and females. Breeders are continually seeking to raise cattle with longer horns. The Texas Longhorn Breeders Association of America even conducts an annual Horn Showcase and sale with prizes for the animals with the longest horns.

“Buyers want the big horns. If an animal has distinctive color and good disposition, that adds to the value even more,” Joe said.

Not only did the longhorn set the world record in the Guinness Book of World Records, he was chosen to be one of only 10 world record holders for which Guinness sent a video crew to record his story.

Lazy J’s Bluegrass became quite the celebrity. Joe brought him to Fort Worth for the annual longhorn sale and posted a video of Bluegrass walking into his pen on Wednesday evening. By the time of the sale on the following Friday night, the video had reached 4 million hits. On that night, Lazy J’s Bluegrass sold for a record $48,000. “The horn race is definitely on,” Joe said.

A video crew came to Kansas and recorded footage of Lazy J’s Bluegrass, the world record-setting longhorn steer. We commend Joe and Stephanie Sedlacek for making a difference with their commitment to this unique breed. The legacy of these cattle is truly long.

And there’s more. Remember the specially designed working chute? We’ll learn about that next week.

As a kid, Joe Sedlacek was fascinated by longhorn cattle. He began his own longhorn herd as a teenager and developed them to the point that one of his steers became a three-time world-record holder.