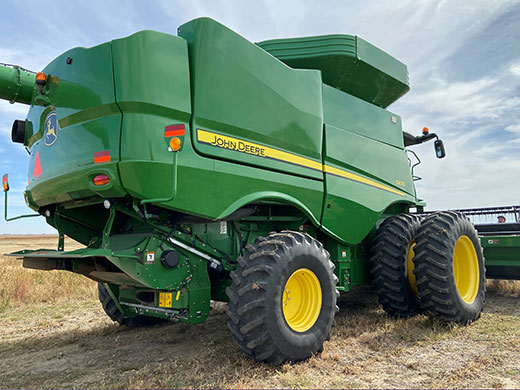 Researchers in Kansas and neighboring states are studying the effectiveness of a roller cage mill, which can be attached to the back of a combine during crop harvest to -- literally -- crush weed seeds. | Download this photo.

MANHATTAN, Kan. – A Kansas State University researcher in western Kansas says he may have an innovative way to kill weeds commonly found in farmer’s fields: simply put, he wants to crush ‘em.

That’s right, says Vipan Kumar, a weed scientist at the Agricultural Research Center in Hays: He’s studying a method known as Harvest Weed Seed Control (HWSC) in which weed seed is literally pulverized by a rolling cage mill that is fitted to the back of a combine during harvest.

“This system,” Kumar said, “is designed to destroy weed seed so that it becomes non-viable for the next year.”

HWSC is a method first advanced in western Australia, known as a region where weeds have developed widespread resistance to common herbicides. A version of the rolling cage mill was actually developed by an Australian grower who had become frustrated with other weed control methods.

Current versions are also now being manufactured in Canada. Kumar is cooperating with weed scientists at Iowa State University and the University of Arkansas to find out just how effective a system that crushes weed seeds will work in Midwest and High Plains crop fields.

“We don’t know much yet; not much data exists in the United States,” Kumar said. “We conducted a preliminary test this fall in a grower’s field, and the seed crusher did a decent job of crushing Palmer amaranth seeds in a milo field that was heavily infested with pigweed.

“I’m hoping that this will be a good fit for wheat and soybean folks, as well, and that they can make good use of it in terms of integrated weed management.”

Kansas farmers routinely face such nemeses as Palmer amaranth and other pigweeds, feral ryegrass and kochia, which have developed varying degrees of resistance to herbicides. Because of that – plus the rising cost of chemicals and other inputs – farmers will need options for managing weeds.

“Longer term from a weed science standpoint, HWSC is one type of technique farmers need to bring into their management system if they want to mitigate the resistant weeds on the farm,” Kumar said. “There is no silver bullet; you won’t resolve all your problems with this method, but it can play a critical role in integrated weed management if you combine it with other methods of weed control, and you are making weed management plans for the next 4-5 years rather than an annual basis.”

To date, the roller cage system is likely cost-prohibitive for farmers – manufacturers currently are producing the system for about $75,000 – and using the system will require a combine to pull at 80-100 horsepower. But Kumar anticipates the price for the system will come down over time as the technology is perfected and use becomes more widespread.

“As a researcher, we can show growers if it’s going to work or not,” Kumar said. “Over the next couple of years, we will create data from Kansas fields; we already have data from Iowa where we found that this system destroys more than 90% of waterhemp seed, using the same unit from the same manufacturer that we are using.”

He anticipates that K-State’s research also will dig deeper into the economics, factoring in the cost of equipment, potential yield increases and decreased use of herbicides.

Kumar, who is part of a national core of scientists that go by the acronym GROW (Getting Rid Of Weeds), has also studied the benefits of another HWSC known as chaff lining, in which crop chaff and weeds are funneled into narrow rows behind a combine. The residue is left to over-winter, causing the weed seed to decay, or the thin row can be destroyed with fire.

He has teamed with weed scientists from Colorado, Oklahoma, Iowa and Arkansas on two, multi-state grants funded by USDA’s National Institute of Food and Agriculture. The researchers will explore the effectiveness and relevance of chaff lining and the seed crusher as part of integrated weed management in the High Plains’ no-till dryland crop production systems.

More information on weed management is available from the Western Kansas Agricultural Research Center in Hays.

Weed scientist Vipan Kumar is studying a method in which weed seed is literally pulverized by a rolling cage mill that is fitted to the back of a combine during harvest.

“There is no silver bullet; you won’t resolve all your problems with this method, but it can play a critical role in integrated weed management if you combine it with other methods of weed control."