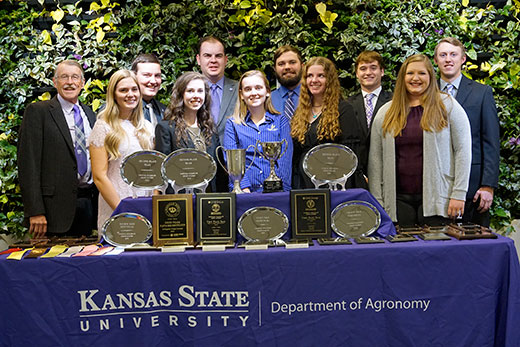 K-State had won both events for each of the past three years and for 17 of the past 21 years through 2019. Both were cancelled last year due to COVID. K-State placed first in the central regional contest in Oklahoma earlier in the fall.

In the contests, participants are required to identify 200 different plant or seed samples of crops and weeds; grade eight different samples of grain according to Federal Grain Inspection Service standards; and analyze ten seed samples to determine what contaminants they contain.

K-State placed first in grain grading and plant and seed identification at the national contest, and second in seed analysis.

At the American Royal, K-State placed first in plant and seed identification and second in the other two categories.

Individually, Bott placed fourth at nationals and second at the American Royal, while Kaufmann was fifth and third at those same contests. Bott also placed first in identification at both events, and second at KC and third at Ames in grain grading. Kaufmann placed second in identification at both contests. Mullen was first in grain grading at the American Royal.

The primary sponsor of the Ames contest was the CME Group. Additional donors included the Crop Science Society of America, Growmark Cooperative, the Society of Commercial Seed Technologists and Syngenta.

K-State's crops judging team, which had won 17 of the past 21 national titles, finished the 2021 season as the runner-up.