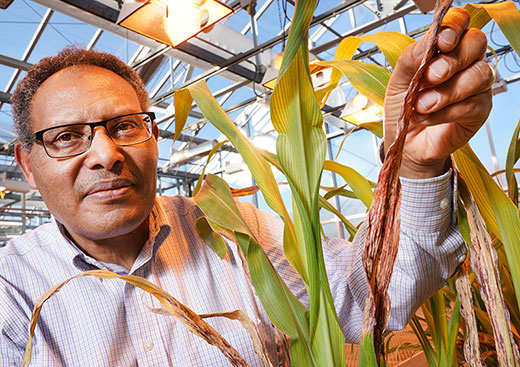 MANHATTAN, Kan. -- Scientists with the Feed the Future Innovation Lab for Collaborative Research on Sorghum and Millet (SMIL) have developed a sorghum variety they say will provide natural resistance to pathogens and pests that have crippled the crop in humid, lowland areas of western Ethiopia.

Their research is reported in the Jan. 9 issue of The Plant Cell, a journal of the American Society of Plant Biologists.

Timothy Dalton, director of SMIL – based at Kansas State University – said the researchers’ work will “serve the broader sorghum development community and is a flagship global good, public characteristic of the U.S. land grant mission.”

The K-State lab led by Dalton funded work in Ethiopia and West Africa to map genes and explore more than 2,000 pieces of germplasm in numerous field trials spanning several years.

“The new variety, called Merera, has multiple benefits, including resistance to pathogens and birds, and it yields better than current varieties that Ethiopian farmers have,” said Tesfaye Mengiste, a professor of botany and plant pathology at Purdue University, and the principal investigator for the research.

Mengiste said Merera has shown resistance to Anthracnose, a devastating fungal disease that attacks all parts of the plant – leaves, stalk and head – leaving almost nothing to be used for food (sorghum’s primary use in Africa), biofuels or animal feed (the primary use of sorghum in the United States).

“With these improved traits and yield potential, it can mean a better livelihood for (farmers),” Mengiste said.

A newly discovered gene, named Anthracnose Resistance Gene1, or ARG1, is unique, according to Mengiste.

“Although some natural resistance to fungal disease was known in sorghum, genes that confer widespread resistance have not been identified,” he said. “It is remarkable that a single gene leads to resistance across a broad spectrum of fungi and multiple strains of the Anthracnose fungus.”

Mengiste cited recent results with Merera that indicate up to a 43% increase in sorghum yields, which has led to increased income for smallholder farmers.

In 2013, the U.S. Agency for International Development (USAID) invested $13.7 million to establish the Feed the Future Innovation Lab for Collaborative Research on Sorghum and Millet at K-State. The lab’s primary focus is to improve the productivity, disease resistance, agronomy and economic of sorghum and millet in six partner countries.

In 2018, USAID renewed its commitment to SMIL, awarding $14 million over five years to continue the project’s work.

USAID funds several Feed the Future Innovation Labs across the country to harness the capacity of U.S. land grant institutions, other universities and the private sector to improve food security globally.

The sorghum variety recently developed for Ethiopia – while directly benefitting farmers in that country – is much like many other Feed the Future projects that aim to build knowledge to help farmers throughout the world, including the United States.

“Through this collaborative research supported by SMIL and the funding through USAID, we will continue to explore the rich Ethiopian germplasm to come up with the next resilient and high-yielding varieties,” Mengiste said. “With better leveraging of recent genetic technologies, we will expedite the development of the new generation of varieties or those in the pipeline.”

More information about SMIL and other K-State Feed the Future projects is available online.

Scientists with K-State's Feed the Future Innovation Lab for Collaborative Research on Sorghum and Millet have developed a sorghum variety they say will provide natural resistance to pathogens and pests.

“(This research will) serve the broader sorghum development community and is a flagship global good, public characteristic of the U.S. land grant mission.”