The researchers say they have saved the sorghum crop in Haiti, where smallholder farmers witnessed the devastation the sugarcane aphid can cause when it nearly eliminated their crop in 2017.

Two years before that, an aggressive form of sugarcane aphid, M. sacchari, had been rapidly expanding and putting more than 90% of sorghum-producing areas of North America at risk.

Geoffrey Morris, a professor at Colorado State University and principal investigator for the study, worked with a Haitian sorghum breeding program to develop a global germplasm exchange.

“We were able to identify a molecular marker to combat the aphid desolation rapidly thanks to a half century investment in sharing sorghum germplasm worldwide,” Morris said. “The focus of SMIL and its predecessor, INTSORMIL, to push for the global exchange of sorghum breeding research is essential in this approach and discovery.”

Timothy Dalton, SMIL director and professor of agricultural economics at K-State, said the sorghum breeding global exchange network is “a backbone for this solution to the current aphid problem, and for future pests.”

“We started this research back in the 1980s with the greenbug (aphid), which was the priority pest at the time,” he said. “But we have seen through this public exchange of information across the globe that we were able to solve the latest pest issue more rapidly. We believe this truly helped save sorghum’s viability for many smallholder farmers in Haiti that depend on it for the base income and food source for their family’s survival.”

The researcher’s findings are reported in the Feb. 11 issue of Science Advances in an article titled,The recent evolutionary rescue of a staple crop depended on over half a century of global germplasm exchange.

During the research, the team discovered a single gene naturally responsible for aphid resistance. When researchers combined genomic scan technology with previous research, they were able to validate that a molecular marker gene known as Resistance to Melanaphis sacchari-1 (RMES1) was indeed a sugarcane aphid resistant locus and is found throughout the global sorghum breeding network.

The RMES1 gene variant, originally discovered in China, is a global rarity. However, RMES1 originated in Ethiopian sorghum lines, and through the research, it was understood that sorghum breeders across the globe prefer this germplasm. Through research, it was discovered that the identified gene with sugarcane aphid, over time, had already been distributed across the sorghum breeding platforms in three continents.

“As we pulled on the thread of history, we found a whole tapestry of how this success had come through the work of so many different scientists over the last 50 years. Fifty years of breeders, geneticists and entomologists, were tracing it all the way back to farmers in Ethiopia, where this resistance likely originated a few hundred years ago,” Morris said.

“This research allowed us to understand the history behind the genetic evolution of the natural resistance to build the foundation used in today’s genomic tools.”

Morris said the molecular markers developed in this study will facilitate the rapid conversion of existing farmer-preferred varieties to aphid resistant varieties, even though history has proven that pests like the aphid evolve and create new variants.

“With these genetic markers, we can continue to advance resistant varieties and hope to stay ahead of the natural evolution of the aphid,” Morris said.

“The work of SMIL certainly benefits the United States,” said Tim Lust, the chief executive officer of National Sorghum Producers. “Sorghum is a small industry worldwide and leveraging those dollars and the research and human talent is so important.”

Lust said the lessons learned with this project -- from the standpoint of germplasm and plant viability -- are “critical.”

“With this new molecular marker, we can quickly look at how that can be applied, and practical, hands-on research can be done in a timely manner that can get results,” he said. “In all reality that would take us years and years to accomplish domestically by ourselves. And so, it's something that really allows us from a partnership role to evaluate new technologies and how those can be implemented quickly and what those opportunities really allow.”

Sorghum is one of the most important crops in Haiti and worldwide because it is one of the most drought-tolerant cereal crops. Partnerships with researchers in Africa and Haiti were made possible through SMIL and funding from the U.S. Agency on International Development, or USAID.

Dalton said the researchers’ success translates into resilient seeds for low-income farmers in Africa and the Caribbean, and improved profits for farmers in the United States.

“These findings reiterate why we will continue to focus on ensuring sorghum production grows and evolves in our focus countries, such as Haiti, to support this vital crop to so many smallholder farmers,” Dalton said. “But it also reiterates why we will continue to stress the need for sharing and learning across countries, continents and generations of researchers with the global exchange of sorghum research. This exchange benefits sorghum farmers small and large and maximizes the research time and dollar investment.”

More information about K-State’s Feed the Future Innovation Lab for Collaborative Research on Sorghum and Millet is available online. 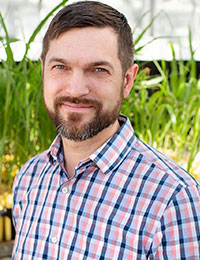 A research team supported by K-State’s Feed the Future Innovation Lab for Collaborative Research on Sorghum and Millet has helped the sorghum crop in Haiti, where smallholder farmers have experienced devastating losses caused by the sugarcane aphid.

"...We have seen through this public exchange of information across the globe that we were able to solve the latest pest issue more rapidly. We believe this truly helped save sorghum’s viability for many smallholder farmers..."

Journal article: The recent evolutionary rescue of a staple crop depended on over half a century of global germplasm exchange