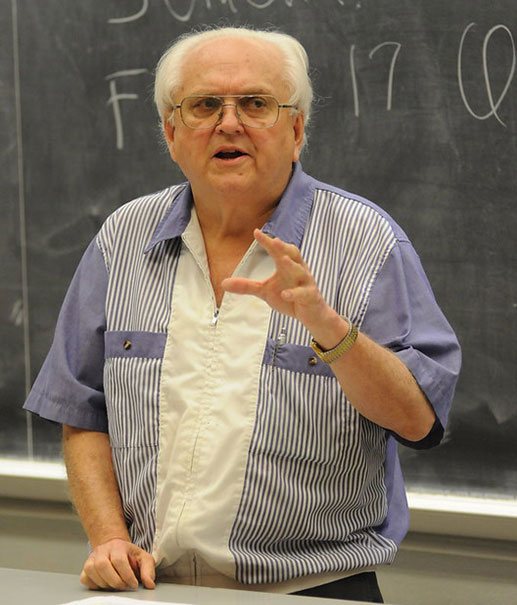 MANHATTAN, Kan. -- A national grassroots organization that supports agricultural research, extension and teaching has granted one of its top honors to Barry Flinchbaugh, a world-renowned agricultural economist and Kansas State University College of Agriculture professor.

The Council for Agricultural Research, Extension and Teaching (CARET) recognized Flinchbaugh posthumously with the Meritorious Service to CARET award, which recognizes those who have made significant contributions to enhance the national support and understanding of the land-grant university system.

Flinchbaugh was well known as one of the country’s leading experts on agricultural policy and agricultural economics. For more than four decades, he was a top advisor to politicians of both major political parties, including Secretaries of Agriculture, chairs of the House and Senate Agriculture committees, and numerous senators and state governors.

He was involved to some degree in every U.S. Farm Bill written since 1968 and served on many national boards, advisory groups and task forces, providing input on domestic food and agricultural policy.

Flinchbaugh served as chair of the Commission on 21st Century Production Agriculture, which was authorized in the 1996 Federal Activities Inventory Reform (FAIR) Act, also known as the Freedom to Farm Act.

Since coming to Kansas State University in 1971, Flinchbaugh taught a 400-level course in agricultural policy and served as an agricultural economist for extension. He taught more than 5,000 students, and his former students include governors, members of the house and senate, staff for agricultural trade organizations, lobbyists, professors, deans, county commissioners and school board members.

He is remembered for his impactful storytelling style and his tremendous commitment to his students and those he served throughout the state.

Until his death in November 2020, Flinchbaugh received approximately 100 speaking invitations a year and authored 100-plus publications, including an agricultural policy textbook.

The presentation of the Meritorious Service to CARET Award was made during the 2022 Joint CARET/AHS annual meeting on March 6-9.

CARET stands for the Council for Agricultural Research, Extension and Teaching. AHS is an acronym for Administrative Heads Section, which is a unit of the Association of Public and Land-grant Universities’ Commission on Food, Environment, and Renewable Resources.

The Council for Agricultural Research, Extension and Teaching has recognized former K-State professor Barry Flinchbaugh with one of its top honors.