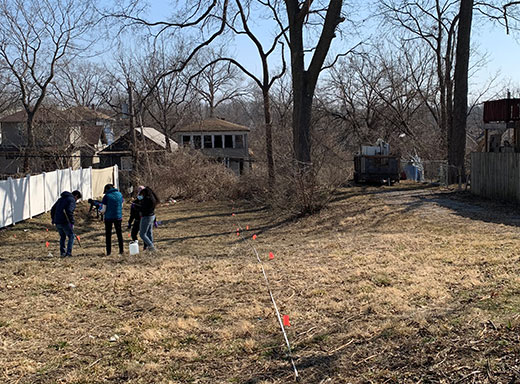 K-State graduate students collect soil samples in a Kansas City neighborhood leading up to a study on how to stabilize lead in soils and minimize exposure to humans. | Download this photo.

Keeping lead in its place

MANHATTAN, Kan. – A Kansas State University researcher is embarking on a study that could help to reduce the risk of lead in soil around homes and vacant city lots.

Ganga Hettiarachchi, a professor of soil and environmental chemistry in the university’s Department of Agronomy, recently received a three-year grant for $700,000 from the U.S. Department of Housing and Urban Development (HUD) to reduce human exposure to lead in soil, especially among children under age 6.

Most of the work will be done in neighborhoods around Kansas City, including up to a dozen brownfield sites, or land previously developed that is no longer in use and has known or suspected contamination.

“People think soil chemistry is basic science, and most of the time it is,” Hettiarachchi said. “But in this case, it is basic science that can be applied to public health.”

According to information from the U.S. Centers for Disease Control, exposure to even low levels of lead can cause damage over time, especially to children. Lead exposure can stunt childhood brain development, as well as cause damage to the brain and nervous system in children and adults, among other health risks.

The Missouri Department of Health and Senior Services reports that lead-based paint and contaminated dust are the most common sources of exposure in the United States. Soil often becomes contaminated from natural weathering of exterior-based paint from houses and other structures. Areas around houses built before 1978 – when lead-based paint was banned -- are more susceptible to lead contamination.

Hettiarachchi said basic soil chemistry – for example, adding phosphorus sources to soil, or applying mulch or wood bark in home landscapes – could be key to immobilizing or reducing direct exposure to lead and other contaminants in soil.

“In Kansas City, we have a lot of brownfields in neighborhoods where we suspect high lead levels,” Hettiarachchi said. “Initially, we will screen a large number of lots and then depending on their soils and levels of lead, we will pick 10-12 sites to study further.”

Hettiarachchi’s research team will build test plots in each area and apply soil amendments to determine the best way to decrease the so-called bioavailability of lead to children and adults.

She said the team also will apply soil amendments to select residential sites to evaluate the potential benefits of immobilizing soil lead in its original place, known as in situ stabilization.

“To our knowledge, there are no studies evaluating the benefits of adding in situ stabilization methods to current state and local lead poisoning mitigation programs,” Hettiarachchi said. “We anticipate that the findings from this study will improve the current practices adopted by the CDC’s Childhood Lead Poisoning Prevention program around the nation.”

David Rosowsky, K-State’s vice president for research, lauded the project: “Dr. Hettiarachchi’s study is an excellent example of how research that is being done at K-State is being applied to directly improve the lives and health of people in our state and around the world,” he said.

In 2021, the CDC estimated more than 500,000 U.S. children under age 6 have blood lead levels higher than 5 micrograms per deciliter, the level at which recommended public health actions be initiated.

Recently, the CDC changed the recommendation to 3.5 micrograms per deciliter, even though public health officials agree that no amount of lead is safe for children.

“If we can find ways to reduce bioavailability of lead in these mildly contaminated soils in situ, I think that can be really beneficial for human health, and especially for children,” Hettiarachchi said.

She adds: “Working with the Environmental Protection Agency and HUD better positions this project for successful outcomes, and what excites me is the potential to replicate these results in other cities across the country. Simply stated, Kansas City could be a model city.”

Hettiarachchi has formed partnerships with the Kansas City (Mo.) Health Department and its Brownfields Program; Children’s Mercy Hospital; and the EPA’s National Risk Management Research Laboratory in Cincinnati, in addition to HUD.

A $700K grant from the U.S. Department of Housing and Urban Development is funding a study to help reduce human exposure to lead in soil, especially among children under age 6.