Where was it raised? On the Good Farm, half a continent away in Kansas. 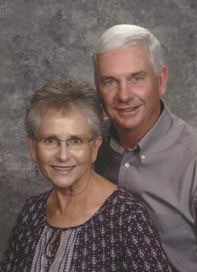 Craig and Amy Good are the owners of Good Farm, the source of this specialty pork. Craig, the son of Don and Jane Good, grew up in Manhattan. He graduated from Manhattan High and earned a degree from Kansas State in animal science. Craig met and married Amy who earned her degree in what is now called health and human sciences.

After graduation, Craig worked for Fred Germann, who was an innovator in producing Specific Pathogen Free hogs. After five years, with Fred’s blessing, Craig and Amy moved to a farm near Olsburg and started producing breeding stock of their own.

“My passion is to make the next generation of production better than the last,” Craig said. He worked hard on improving the family’s swine herd and selling quality breeding stock to other pork producers.

Then the hog market crashed in1998. The market dried up for Craig’s boars and gilts.

“We went through a brief time of blaming others,” Craig said. “We could blame the packers or blame the corporations, but the blame game serves no purpose.”

Craig and Amy came up with possible alternative crops for their farm and approached K-State agricultural economist Vincent Amanor-Boadu. He looked at the alternatives but ultimately said to them: “Do what you’re good at, and that is raising hogs.”

Amanour-Boadu connected Craig and Amy with a start-up company in Brooklyn, New York that was interested in utilizing heritage livestock breed products from independent farmers for the upscale restaurant industry.

That company is now known as Heritage Foods USA. The founders of Heritage Foods made a trip to Kansas to visit Craig and Amy’s farm near Olsburg, starting a relationship that is in its 19th year.

Heritage Foods USA sources heritage breed products for a number of upscale urban restaurants, especially on the east and west coasts. This was a totally different market than what the Goods had reached in the past.

“We donated a pig to a benefit event that was being held in the Hamptons for some worthy cause being promoted by Mikhail Baryshnikov,” Craig said. Heritage Foods USA continued to build a network of restaurants. “That was the start of the farm-to-table movement on the coasts. Now they buy everything we can produce.”

The Goods raise Duroc hogs as well as Old World breeds such as Gloucestershire Spot and Tamworth. “(The Heritage Foods USA people) have a saying,” Craig said. “They say, `To save a breed of livestock, you have to eat it.’ That may sound crazy, but what it means is, if you can create consumer demand for products from that breed, then more farmers will grow them.”

Heritage Foods USA brought groups of chefs to Good Farm in Kansas to see Craig and Amy’s livestock production practices, and family farm firsthand. “Every piece of pork is traced back to the farm,” Craig said.

One day, Craig got a call from the folks at Grandma Hoerner’s, a nearby company that processes fruit and other products. An ice storm had knocked out their refrigeration temporarily. Seven pallets of frozen plums had thawed out to the point that they couldn’t use them, so they called Craig to see if he wanted to feed them to his hogs.

“I called New York and said, `How do you feel about plum-fed pork?’ They loved it,” Craig said. Then there was a neighbor with a Jersey cow who gave excess milk, so the Goods fed the hogs milk with good consumer results as well.

“We want to raise the best product out there,” Craig said. It’s a lofty goal for a family farm near a rural community such as Olsburg, population 219 people. Now, that’s rural.

We commend Craig and Amy Good for making a difference with niche marketing and building relationships with urban consumers. I’m glad this has produced such Good results.

When the hog market crashed in 1998, producers Craig and Amy Good looked for an alternative outlet for their pork production. A K-State professor connected them with Heritage Foods USA which was looking for high quality products produced by independent farmers using heritage breeds.