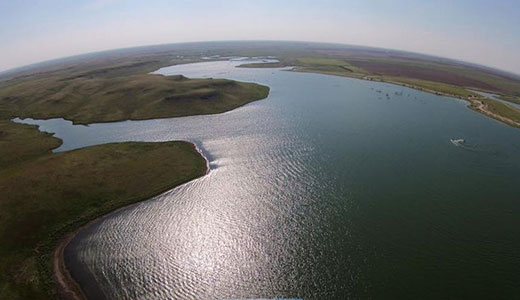 Would you like to go camping on a lakefront property? Then build yourself a lake next door.

That statement might sound overly simplistic, but today we’ll learn about a reservoir that was recently constructed in southwest Kansas. It is serving the outdoor recreation needs of thousands of people in Kansas and beyond.

Audrey grew up at Tribune, studied Tourism and Hospitality at Fort Hays State University and became manager at HorseThief in November 2021. Gene Webb is a lifelong resident of Hodgeman County where the lake is located.

Gene served on the board of the HorseThief Reservoir Benefit District for many years. “The Corps of Engineers had been interested in the possibility of a dam here back in the 1930s,” Gene said.

In tight budget climates, how would such a project get accomplished? In more recent years, the Pawnee watershed district studied the issue and proposed going to the state to create a tax benefit district that could generate resources for reservoir construction.

“I was on an advisory committee to see if people were willing to support a sales tax to build the lake,” Gene said. In 2004, the proposal was put on the ballot in Hodgeman, Ford, Gray and Finney counties. The proposal passed by more than a 2-1 margin. The Pawnee Watershed District owns the land, which is leased to the HorseThief Benefit District.

In 2009, the 7,200 foot long dam was completed. The reservoir was constructed in a scenic area nine miles west of the rural community of Jetmore, population 770 people. Now, that’s rural.

The reservoir takes its name from a nearby canyon where the old-timers say horse thieves were hung back in frontier days. Here’s my advice: When you come to the reservoir today, bring your own horse….

HorseThief Reservoir is now the largest body of water in southwest Kansas, consisting of 450 acres of water in 1600 acres of prairie. “Everybody said (the lake) would never fill with water,” Audrey said, due to the fickle nature of western Kansas rainfall. “By spring 2010 it was filled to 50% and by July 2016 it was filled to capacity.”

In 2018, an estimated 100,000 visitors came to HorseThief Reservoir from many states. “We have 54 camping sites with utilities and primitive camping sites all over,” Audrey said.

There are also five yurts, which sounds like something out of a Dr. Seuss book. These are domelike structures for lodging. A reservoir visitor can opt for primitive camping or go for a yurt with the comforts of home.

A couple of the yurts are fully equipped with running water, refrigerator, stove, microwave, bathrooms, queen beds and more. This is for what some call Glamping – glamorous camping.

There are also special events such as Zombie paintball in the fall, plus a rooster roundup contest and more. “We have a friends group which holds fundraisers with the proceeds going to the reservoir,” Audrey said. “We are actively working on plans for further enhancements to get people here year-round.”

Would you like to go camping on a lakefront property? Then build a lake next door. We commend Audrey Rupp, Gene Webb and all those involved with HorseThief Reservoir for making a difference with this community enhancement in outdoor recreation. Let’s go to the lake!

Audrey Rupp is manager of HorseThief Reservoir, which was constructed in 2009. It is now the largest body of water in southwest Kansas, serving the outdoor recreation needs of thousands of people from Kansas and beyond.