Let’s take a trip back in time. How far?  Let’s say, a couple of thousand years. That’s the premise of a play that one rural Kansas community performs live on Easter Sunday, using a remarkable stone outcropping as a natural stage. 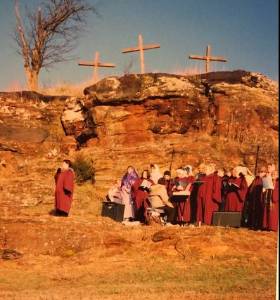 Dale and Berny Unruh and Roy and Tricia Prescott are co-organizers of the working committee that produces this play as the Pawnee Rock Easter Pageant. Dale is a native of the area who taught agriculture before farming. While at K-State, he met his wife Berny, who became an extension agent. Berny is originally from the rural community of Munden, population 100 people. Now, that’s rural.

Tricia grew up at Pawnee Rock. She went to Fort Hays State, married Roy, and is a teacher. Both the Unruhs and the Prescotts live near Pawnee Rock today.

The town of Pawnee Rock is named for the actual rock, a remarkable sandstone outcropping that stands 50 feet above the surrounding plains. For centuries it has been a landmark for natives and travelers across the prairie.

In 1932, an east-coast author wrote an Easter-themed play called The Way of the Cross.  It tells the story of a modern-day person who goes back in time and is observing the events in the city of Jerusalem at the time of Jesus’s crucifixion. According to the Bible, the crucifixion took place on a hill near Jerusalem.

In 1936, the ministerial alliance at Pawnee Rock decided to perform this play outside as a sunrise Easter pageant, using the rock itself as the natural backdrop. Three crosses were temporarily placed atop the rock. A choir provided accompaniment. It worked so well that, until 1972, the pageant was performed annually (except for World War II) on Easter Sunday.

In 1981, the pageant was revived by local volunteers with the plan to perform it every other year. That tradition continues today, although the pandemic forced a postponement in 2021. On April 17, volunteers will again perform the pageant at the historic Pawnee Rock.

Vivian Bright was the organizer of this event for more than 20 years. Vivian turns 90 in 2022. In 2019, her daughter Tricia Prescott and Tricia’s husband Roy assumed the co-organizer role along with the Unruhs.

This is a multi-generational community event. Tricia and Dale remember their parents hauling them to the pageant as kids. Tricia now plays the part of Salome, which her mother Vivian had played at one time. “(Vivian’s) mom had helped with the choir in the 1940s,” Tricia said.

There are also roles in the play for children. “I was told, `We’d like your daughter to play one of the children’s parts. And by the way, since you’re here anyway, we’ve got an opening for a Pharisee,” Dale said. The Unruhs have been involved ever since.

Dale and Berny’s daughters are now grown. Both live in Manhattan but return for the pageant. Nicolette is a managing partner of Nico’s Little Italy restaurant and Danette is a radiology technician. In the pageant, Nicolette plays Mary Magdalene and Danette is the Spirit of Easter. Their mom Berny helps with the costuming.

In 2022, Tricia Prescott’s seven-year-old granddaughter will fill one of the children’s roles. That would make the fifth generation of her family to participate in the event.

A professional sound company provides sound for a discounted fee. Volunteers do setup and cleanup. After the pageant, the owner of the old train depot opens it up for donuts and coffee.

“This is a fun event for our little community to really grab hold of, and the play has a great message,” Dale said. The rock itself is a prominent feature of the play.  “That setting makes you feel like you’re going back in time,” he said. “It’s a really bright spot for our community,” Tricia said.

For more information about the pageant, search for Pawnee Rock Easter on Facebook.

It’s time to return to the present, where the rural community of Pawnee Rock is preparing for the 2022 Easter pageant. We commend all the volunteers who are making a difference by conducting this performance. I hope they rock on!

In 1936, the ministerial alliance in the rural community of Pawnee Rock decided to put on an outdoor performance of an Easter play as an Easter Sunday sunrise pageant, using the actual Pawnee Rock as the natural backdrop. The tradition continues today.