To find a good brewery, does a person have to go to the big city? No. In fact, we’re going to visit the state’s smallest town with an active brewery. 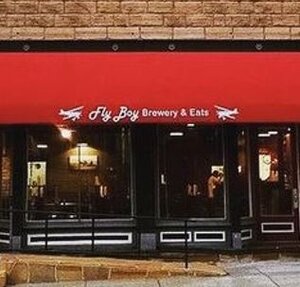 Lucas Hass and Grant Wagner are the owners of Fly Boy Brewery & Eats in Sylvan Grove. Both Lucas and Grant are originally from Bennington.

“I’ve always loved food and cooking, and also a good beer,” Lucas said. He worked at a steakhouse in Emporia before taking a job doing business analytics at a manufacturing company in Salina.

Grant became a chef at top-end restaurants in Kansas City before moving back to north central Kansas to be near family.

In 2014, Clay and Linda Haring bought a building in Sylvan Grove, remodeled it, and started a brewery and restaurant. Clay is an agricultural pilot and Linda is a teacher.  Because Clay was a pilot, they decorated the establishment with an aviation theme and called it Fly Boy Brewery & Eats, or Flyboys for short.

Grant Wagner helped them set up the kitchen. When Clay and Linda got so busy with their other work that they decided to sell the restaurant, Grant approached Lucas with the idea of buying it. Together they became the new owners of Fly Boy Brewery & Eats.  “This is a great restaurant and we didn’t want it to be lost,” Lucas said.

“On the first weekend of every month, we have a prime rib special and this place is packed,” Lucas said. “We use certified Angus beef and get what beef we can locally.”

Lucas also enjoys the process of brewing beer. “I’m a big science buff, so I enjoy that part of it,” he said.

Flyboys has all the brewing equipment, including glycol-chilled fermenters. Lucas has developed some beers using his original recipes. “We’ve figured out how to get nice crisp clear flavors,” he said.

Yes, I do detect an aviation theme.

One beer is a Prohibition lager, using ingredients that were popular around the time of Prohibition. It’s called Hell’s Broth. “A local historian told us that was what Carry Nation called these drinks,” Lucas said. “We keep two seasonal beers on rotating taps at all times, and we have seven flagship house beers.”

“We get lots of lake traffic and we get a lot of hunters during hunting season,” Lucas said. Although many restaurants experience a drop in business after the holidays, Flyboys has seen some increase during the 2022 off-season. They also managed through the Covid-19 pandemic.

“We were able to take over in some of the most tumultuous times in the restaurant business and make it through,” Lucas said. “It shows how great of a community and how great of a staff that we have. We’re just really appreciative of the community for coming out and supporting us.”

It’s remarkable to find this restaurant in a rural community such as Sylvan Grove, population 279 people. Now, that’s rural.

Recently Flyboys was visited by an author of an upcoming book about breweries in Kansas.  He told them that their community, Sylvan Grove, is the smallest town in the state with an active brewery. We commend Lucas Hass, Grant Wagner and all those involved with Fly Boy Brewery & Eats for making a difference with their commitment to good food and drinks in small town Kansas.

I hope Flyboys will continue to reach new heights.

After an agricultural pilot in north central Kansas opened an aviation-themed brewery and restaurant in Sylvan Grove, two other local men purchased it and expanded the offerings. Fly Boys Brewery and Eats features made-from-scratch main dishes, local certified Angus beef, and original beer flavors. They have been recognized as the smallest town in Kansas with an active brewery.