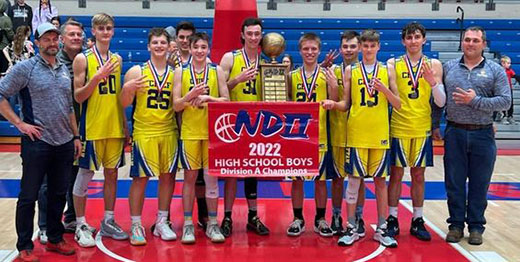 Not once…not twice…not three times. For four years in a row, a basketball team of small town, homeschooled high school boys has claimed the championship in a national basketball tournament. This team is based in rural Kansas.

Casey Amerin is coach of this championship team. Jeff Schurle and Travis Goff from the Keats/Riley area are the volunteer athletic directors. Their team is the Manhattan CHIEF Thunder.

Casey grew up at Plains. He enjoyed playing basketball and football. He studied business education at K-State, became a teacher and coach, and met and married Rebekah. They moved to her home area near Clifton, where Casey manages LCL Buffalo Ranch and worked as a basketball official for several years.

Casey and Rebekah had four sons and a daughter. When they decided to homeschool their children, they learned of a Manhattan-area organization named Christian Homes In Educational Fellowship, or CHIEF for short.

CHIEF is a non-profit organization that provides support to Christian homeschooling families through group meetings, field trips, curriculum and athletics.

CHIEF sports include football, girls volleyball, and boys and girls basketball and golf. The team home court is at the Beacon Center gymnasium owned by Lighthouse Baptist Church in the rural community of St. George, population 639 people. Now, that’s rural.

The Amerins joined CHIEF. When their oldest son Gage became old enough to play basketball, Gage joined the junior high team. Casey made the hour-long drive to take his son to practice and eventually was asked to help coach. In 2017, as Gage moved up to the high school level, Casey became the head boys basketball coach.

His teams have had much success. One annual highlight is a trip to the National Division II Christian Homeschool Association tournament, called NDII for short, played annually at the Sports Arena in Hutchinson. It is open to any similar homeschooling organization in the nation, but most come from the central U.S. About 70 boys and girls teams typically participate, and teams play in categories by size of their organizations.

In Casey’s second year as head coach, the Manhattan CHIEF Thunder team won the NDII championship – and have repeated that championship every year since, winning the fourth straight in 2022.

What is the reason for such success? “It’s the kids,” Casey said. “They have good talent and great character, which is a product of how they’ve been raised. They want what’s best for the team, not just themselves.”

“We tell these kids that their priorities should be God first, family second, work and/or school third, and extracurricular fourth,” Casey said. “But among the extracurricular activities, we want basketball first.”

“I enjoy the opportunity to be around the kids and guide and teach them,” Casey said. “I want to help build their Christian character and mold their priorities. It’s great to see them improve and find success.”

Valuable life lessons can be taught through the wins and losses of a season. “When you experience a loss, you can let it define you, or you can let it drive you to become better,” Casey said.

The Thunder coaches set up a team communication app to be used by players and coaches. “We post schedules, practice times, team news and other things,” Casey said. “We encourage them to check it each day, since we don’t see them daily like you would in a brick-and-mortar school.

Recent player postings expressed lots of pride in the season and love for their teammates. Casey was especially pleased to see statements of commitment for doing the work to continually improve.

Casey is grateful for the many volunteers it takes to maintain an organization like CHIEF at a high level. "There are so many people that do so many things to make this organization run so well,” Casey said.

Not once, not twice, not three times, but in four straight years the Manhattan CHIEF Thunder have claimed the NDII championship. We commend Casey Amerin and all those involved with CHIEF for making a difference with commitment to high values and high achievement.

Casey Amerin was a teacher and coach before he and his wife started homeschooling their children. He became a coach again when his oldest son became old enough to join the homeschool basketball team, and now has led his team to four straight national championships at the division 2 Christian homeschool association tournament.