From hay to historic buildings -- and parts to pies -- Craig Stertz is involved in his rural community. He is what we call a ruralpreneur, an entrepreneur taking on multiple projects in his small town. 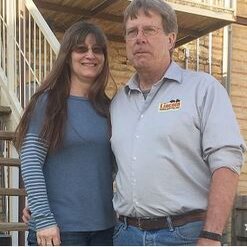 Craig and MaryAnn Stertz are ruralpreneurs in Lincoln, Kansas. Craig was born in Lincoln before his family moved to Belleville. Nine years later, the family moved back to Lincoln where Craig’s father founded Lincoln Farm Supply.

At right: MaryAnn and Craig Stertz | Download this photo

Craig followed his dad into the family business, which he owns today along with his brother Terry and partner Darrell Oetting. Craig also met and married MaryAnn, who works in the county treasurer’s office. He is in his second term as president of the Lincoln Chamber of Commerce.

Lincoln Farm Supply provides new and used equipment, parts and repairs for farm operations in north central Kansas. The company is a dealer for multiple lines of farm equipment.

In response to customer needs, hay handling has become a specialty of Lincoln Farm Supply. “A combine or a planter gets used one time a year, but hay equipment might get used 4-5 times a year,” Craig said. Equipment has changed to include the making and stacking of giant square bales, and even treating the hay by steaming it.

“At one time, we were the largest big square baler dealer in four states,” Craig said.  Access to the Internet has also made a difference. “It extends your reach,” he said. “The other day I got a call from a guy in Oregon who bales rice straw and he wanted some of our equipment.”

In order to complement the farm store, Craig co-located an auto parts business with Lincoln Farm Supply. “That makes good use of our parts guys’ time when it’s slow during the winter months. It also brings new people in the door,” Craig said.

One of MaryAnn’s clients owned an old stone building downtown. After the owner’s husband passed, the building sat empty for years and was deteriorating. The woman decided to sell it rather than see it torn down.

“MaryAnn came home and told me, `We don’t want a hole in downtown,’” Craig said.  Craig and MaryAnn bought and remodeled the building. “It was 2 ½ years of working nights and weekends, and MaryAnn was working side by side with me,” Craig said. “We had to tear out a lot of rotten wood, but we put it back the way it was.”

It looks great. Now a coffee shop is on the first floor and the upstairs is an Airbnb.

Craig also explored investing in food businesses. “Mostly I followed my stomach,” he said. He considered out-of-state companies that make salsa and barbecue sauce before he considered MarCon Pies.

As we have previously profiled, MarCon Pies in Marysville produces handcrafted pies for the wholesale market and fundraisers. The company is named for the original bakers, Marilyn and Connie, who started the business.

Using heirloom recipes and delicious ingredients, MarCon produces pies in flavors such as apple, apricot, blackberry, blueberry, cherry, peach and strawberry rhubarb. No-sugar-added options are available in apple, cherry and peach. Pecan and pumpkin pies are available in April and in October through December.

Craig tries to encourage other businesses in town to have an Internet presence. “You can have a Main Street business, but if you also sell online, you can generate additional revenue from outside the community,” he said.

For more information on Craig’s businesses, see www.lincolnfarmsupply.com and www.marconpies.com.

From pies to parts, from historic buildings to hay, we salute Craig and MaryAnn Stertz for making a difference with their local investment. They demonstrate commitment to their community.Audio and text files of Kansas Profiles are available at http://www.kansasprofile.com. For more information about the Huck Boyd Institute, interested persons can visit http://www.huckboydinstitute.org.

Craig Stertz joined his father’s farm equipment supply business and has expanded it through the years to specialize in hay equipment, augmented by an auto parts store. Craig and his wife MaryAnn also bought and improved two downtown buildings, one as a coffee shop/Airbnb, and the other that now houses MarCon Pies.