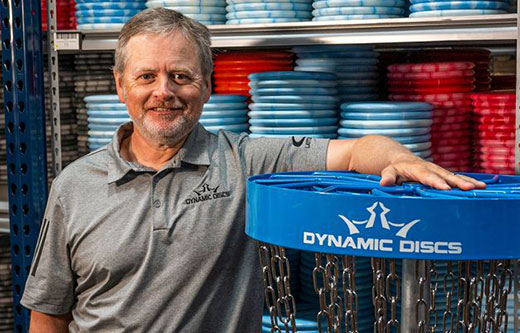 Let’s go to the disc golf capitol of the world. We could travel around the globe looking for such a designation, or we could go directly to… Emporia, Kansas.

Today we’ll learn more about a remarkable business in Emporia which, in many ways, has made its community the center of the disc golf universe.

Last week we learned about Dynamic Discs, the disc golf products company that was founded by Jeremy Rusco in Emporia.

Doug Bjerkaas is the president of Dynamic Discs today. Bjerkaas is an Illinois native who had a career in higher education administration and was playing disc golf for fun.

In 2007, Bjerkaas was living in Denver and attended the disc golf Frontier Open in Hays. He bought some Dynamic Discs t-shirts out of the back of Rusco’s truck. “I was very impressed with how approachable and friendly he was,” Bjerkaas said.

As a player, Bjerkaas was sponsored by Dynamic Discs, as was his daughter in later years. After serving as a tournament director for Dynamic Discs, he joined the company in 2016 and moved up through the ranks to become president in 2021. Through the years, he has seen the remarkable growth of the company and sport.

What has caused the sport of disc golf to grow? “It really is inclusive,” he said. “When I go to the course, I see families with elementary school kids up to a couple of ladies in their 80s,” he said. “Regardless of your skill level, you can play with other people and have fun.”

“The athletic part of the competition takes about 5% of your time,” Bjerkaas said. “The rest of the time, you’re talking and walking the course. You’re building great relationships and friendships while getting exercise outside. It has all the benefits of playing golf, but at a fraction of the cost.”

“We want to do anything we can to grow the sport,” Bjerkaas said.

With the support of Dynamic Discs, Emporia has hosted the professional, amateur and junior world championships multiple times. “We average participants from 45 of the 50 states, including Alaska and Hawaii,” Bjerkaas said. “We’ve had players from Japan, Thailand, New Zealand, Australia and more.”

The company hosts its own Dynamic Discs Open in Emporia each April, and sponsors other tournaments as well as individual top players across the nation.

“After a recent tournament, we were told, `Never has a town been so welcoming and hospitable as Emporia, Kansas,’” Bjerkaas said. “We’re big enough to have amenities but still have small town friendliness.”

Emporia’s position along I-35 in the center of the country has helped with shipping and logistics.

Dynamic Discs has grown from Rusco’s college eBay hobby to a company that employs more than 90 people. “It has really exploded. We sold more than 3 million discs last year,” Bjerkaas said, noting that may be why some people have described Emporia as the Disc Golf Capitol of the World and Disc Golf Disneyland.

For more information, go to www.dynamicdiscs.com.

It’s time to leave the disc golf capitol of the world. We commend Doug Bjerkaas, Jeremy Rusco and all those involved with Dynamic Discs for making a difference through creative entrepreneurship in supporting this emerging sport.

When it comes to accomplishing its mission, this company will hit the target.