MOUNDRIDGE, Kan. – Of all the folks that might visit his central Kansas farm, Ray Flickner probably never figured a group from the nation’s space agency would be among them.

Yet, there they were: A small group of NASA scientists pulling up in SUVs to quiz Flickner about his farm just west of Moundridge.

In these parts, Flickner is pretty well known. He’s the fifth generation owner and operator of what is known as the Flickner Innovation Farm, a partnership with Kansas State University to implement and test such leading agricultural technologies as moisture sensors, GPS guidance systems, drones and more.

But this is NASA, right? Space suits and rocket ships…

“Well, NASA does some great things in space,” said Brad Doorn, the program manager of the agency’s agriculture and water resources program, which is part of the earth science division, “but NASA also spends a lot of time providing information about Earth. And we have an agriculture program.”

Doorn was among five scientists who came to Flickner’s farm in late August to better understand the challenges farmers face related to agriculture and using water resources.

“We want to learn the decisions they’re facing, the technologies they’re working with…so that we can get better acclimated to those challenges,” Doorn said.

The program he leads focuses on “reaching down to end-users in agriculture and water” to understand how the information gathered daily from 22 satellites orbiting the Earth can be used for the benefit of farmers. 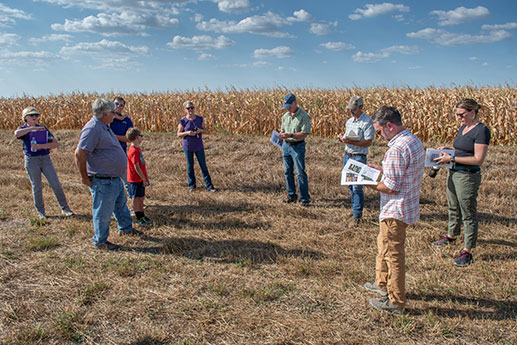 “We then reach back to NASA and explain the possibilities,” Doorn said. “It could be that it’s a future (space) mission, 10 years down the road. It could be something that we’ve already developed; we just need to say, ‘hey what’s been done over here, we need to bring over here.’”

At right: Moundridge, Kan. farmer Ray Flickner (leftt) recently hosted a group of earth scientists from NASA, who were interested in learning how farmers use satellite data and other products on their farms. | Download this photo.

Deann Presley, a soil management specialist with K-State Research and Extension, was among those who came to listen and share with the NASA scientists.

“I just think it’s fantastic that they’re willing to listen and have that conversation with farmers,” Presley said. “They (NASA) are the ones taking these measurements of Earth; they’re the one’s helping with drought prediction and looking at food security around the globe. But they want to take it farther; they want to learn what kinds of tools and products can be useful to farmers.”

Flickner said it’s important that farmers are active in the partnership.

“What I can offer them is I might be able to ‘ground-truth’ some of their findings,” he said. “They’ve got a lot of information that they’re getting from satellites, but is that information legitimate? Is what I’m seeing on the ground the same thing they’re seeing on the satellites?”

During the visit, Flickner’s grandsons – Owen, age 8, and Miles, age 5 – showed up wearing shirts that read “NASA” across the chest, eager to meet the group that had come to their grandpa’s farm. Owen proudly proclaimed he wanted to be a NASA engineer one day. The boys left with shiny ‘NASA’ pins and a backpack full of other gifts.

“NASA is super excited about engaging youth all the way up to college,” Doorn said. “We need agricultural expertise in the space agencies. One of our satellites coming up in the next decade…is a hyperspectral satellite in which many of the requirements came from the agricultural industry.”

“So,” he added, “we need those agronomy departments, biology departments (and others)…all to be thinking that there’s a capability available for assessing our vegetation and understanding our Earth. We want to get students engaged in that (type of work).”

The visit by the team from NASA was organized by the Kansas Center for Agricultural Resources and the Environment, housed at Kansas State University.

Why Kansas? Why not, says NASA program leader

Brad Doorn, the program manager for agriculture and water resources at NASA, said Kansas has been important to the space agency for decades: “You probably didn’t even know it,” he said.

Doorn was among several NASA earth scientists who visited Nebraska and Kansas farms in late August to learn more about farmer’s needs – and how information gathered from outer space can help meet those needs.

He noted that testing in Kansas was important for helping to establish the U.S. Drought Monitor, and separately to address trade and inflation issues in the 1970s.

“We realized that we have satellites that can help assess those issues globally,” Doorn said. “A lot of the testing during (the 1970s) went on in Kansas and the Midwest to understand how to assess commodities.”

“So, it’s been a long relationship (between Kansas farmers and NASA scientists). We know times are changing, but that just means that we have to adjust to provide better information and develop better tools to assess agriculture.”

Kansas Center for Agricultural Resources and the Environment

“We want to learn the decisions (farmers) are facing, the technologies they’re working with…so that we can get better acclimated to those challenges,”