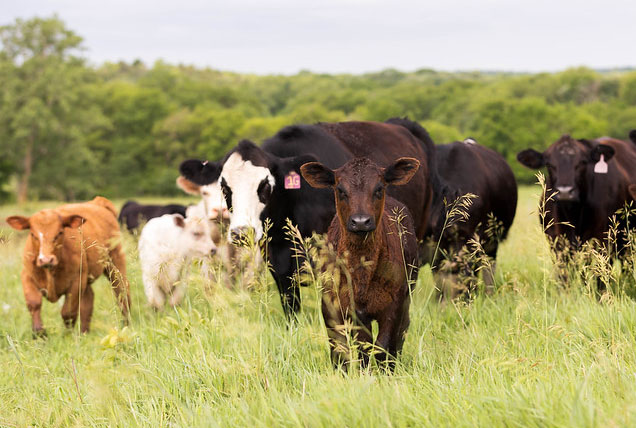 MANHATTAN, Kan. — Go to a family reunion and the keen observer can spot trait similarities in the way people look. Eye color, hair texture, face shape, etc. are just some of the features that tend to be passed through the generations.

Just as with people, cattle also pass traits to their offspring that can be measured, said the experts at Kansas State University’s Beef Cattle Institute.

“The more unrelated the cattle are, the greater advantage there is in heterosis,” Larson said.

He cited the example of a British-breed beef animal mated to a Continental-breed animal as producing a greater level of heterosis than mating two animals of the same breed.

One noted advantage of heterosis relates to feed intake. The experts cited a recent study that showed a crossbred animal’s ability to maintain body weight by consuming less feed than its purebred counterpart.

“There are well-documented differences among the breeds of cattle for maintenance energy requirements,” Lancaster said.

“The fertility advantages of crossbred cattle are known in both males and females,” Larson said. “When you mate two animals of the same breed you are depressing the potential for reproductive efficiency compared to mating cattle of different breeds.”

He added that in a 65-day breeding season, a higher percentage of the crossbred cows will be more likely to be bred than the purebred females.

“The greatest advantage of heterosis comes through traits that are lowly heritable, such as fertility, because so many genes influence reproductive efficiency,” Larson said. “By contrast, highly heritable traits offer less heterosis advantages.”

“Through genetic tests, we can now estimate the heterozygosity (two different forms of a gene that is transmitted in different forms to the offspring on a 50/50 basis) of individuals based on genetic markers,” Lancaster added.

To hear the full discussion, listen to the Cattle Chat podcast online.

"The greatest advantage of heterosis comes through traits that are lowly heritable, such as fertility, because so many genes influence reproductive efficiency."