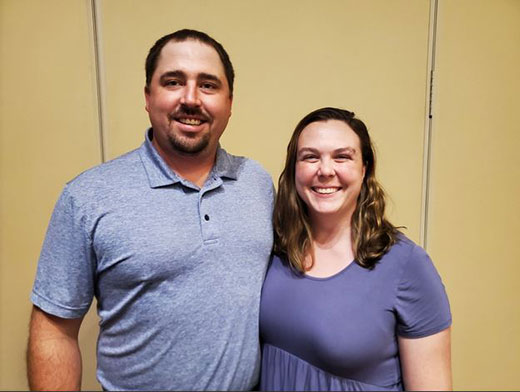 That is hello in Japanese. Today, a shipment from the United States is arriving in Japan. It’s some samples of specialty, high quality pork produced by a family halfway around the globe in rural Kansas.

Kaden and Emily Roush are the owners of R Family Farms and a local grocery store in Lebanon, Kan. Kaden grew up in Lebanon on a crop and livestock farm. Five generations of his family have been involved in agriculture.

Hog production was a major part of the Roush family operation until the hog market crash of the 1990s. As described by the family’s website: “However, out of the ashes sprang an opportunity for an energetic little boy, a few sows, and a 4-H project.”

Roush enrolled in the swine project in 4-H, raised pigs and showed them successfully at the county fair. Soon he was selling extra pigs to fellow 4-H members.

In the process, Roush developed a knack for livestock evaluation. He would develop and use those skills on the livestock judging teams at Allen Community College in Iola and then Kansas State University. The national judging team tours gave Roush the opportunity to observe diversity in agriculture and potential opportunities for marketing pork.

Roush soon met Emily. She was raised on a three-generation wheat, corn and soybean farm near the rural community of Iola, population 5,396 people. Now, that’s rural.

Emily was active in FFA. After studying at Allen Community College, she finished her degree in agronomy at K-State and married Kaden. He earned a degree in agribusiness with a major in animal science.

Together, Kaden and Emily’s families embody more than two centuries of history of caring for the land and animals.

Kaden and Emily thought about the opportunities for niche marketing of pork and decided to move back to his home area to launch a specialty hog enterprise. They named it R Family Farms. The Roush website states about Emily: “Although pigs were not her first love (or second, for that matter), she quickly grew to love them and joyfully welcomed them as a part of her future.”

The Roush’s vision was to educate consumers about where their food comes from while providing a world-class culinary experience. To do so, they chose to raise the Berkshire breed of hogs.

In 2015, R Family Farms broke ground on a new hog facility. The first Berkshire pigs arrived in January 2016. Today, R Family Farms is home to 75 sows that farrow all year long. The resulting litters are raised to market weight. About half of the meat is sold by private label and half to vendors in Missouri. In 2019, they shipped samples to Japan. Meanwhile, Kaden works as a loan officer at a local bank and Emily serves as Lebanon city clerk.

The family needed a specific outlet for their specialty Berkshire pork. They were supplying pork to a national chain of organic whole food stores when the chain cancelled their contract. It appeared to be a disaster.

Then they were contacted by Paradise Locker Meats in Paradise, Mo. That company was selling Berkshire pork to high-end restaurants and suddenly found that their source could not supply it.

“It was divine intervention,” Emily said. “We lost our contract and he’d lost his supplier. He needed the number of hogs that we had.”

The Roush’s farm supplied the pork and Paradise Locker Meats filled the order. The two businesses have worked together ever since.

It’s time to leave Japan, which was the recipient of these Berkshire pork samples produced halfway around the world in Kansas. We salute Kaden and Emily Roush of R Family Farms for making a difference with innovative marketing of their products.

It’s time to say goodbye – or as they say in Japan, “Sayonara.”

And there’s more. Remember that the Roush family owns a grocery store? We’ll learn about that next week.

Kaden Roush was active in the swine project in 4-H and developed a knack for livestock judging. His experience as a collegiate livestock judge helped him develop ideas about high quality pork production for specialty markets, and he and his wife Emily are putting those ideas into practice on their family hog farm.