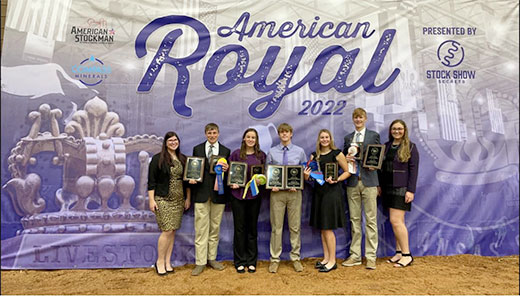 American Royal win is the first-ever for a Kansas team

It is the first-ever national title for a Kansas team, which won by 27 points over Texas. The contest has been in existence since 1970.

“The Kansas team was successful due to their work ethic,” said Katie Lybarger, a meat science graduate student at Kansas State University and the team’s coach.

“These kids met with us for virtual practices weekly, studied on their own time, and practiced from sunup to sundown in the days leading up to the contest. They never once complained and took advantage of every opportunity to get better. More importantly, they had fun together throughout all of this and had a very strong team bond.”

The Kansas 4-H All-Star Meat Judging Team consisted of individuals who placed in the top 10 at the state 4-H meat judging contest in August. According to Lybarger, students needed to have excellent meat evaluation and decision-making skills, and exceptional oral communication.

In addition to Lybarger, the team was coached by Steph Witberler.

“Steph and I enjoyed coaching this team because it was an opportunity to invest back into the next generation of meat judging,” Lybarger said. “We both competed on the K-State meat judging team and found the experience to be incredibly impactful.”

Lybarger credited the 4-H members’ coaches and volunteers at the local level who, she says, “have invested years into these kids.

“They truly give these students the essential meat judging foundation needed to be successful at this level. Our roles as the coaches of the all star team was just to take the kids to that next step.”

Stubbs placed first in retail cut identification with the only perfect score in the contest; first in oral reasons, and first total judging. She was second in pork judging and retail cut judging.

Students evaluated six classes of carcasses or cuts and gave three sets of oral reasons during the contest. Additionally, they identified 30 retail cuts and specified the species, primal, and cookery of each. This year, the team evaluated pork carcasses, beef ribs, pork loins, beef rounds, porterhouse steaks, and pork blade chops. Reasons were given on the pork carcasses, pork loins and porterhouse steaks.

Lybarger said: “This was a talented and hard-working group of leaders, and we feel very lucky to have gotten to know them each through this team.”

“The Kansas team was successful due to their work ethic.”