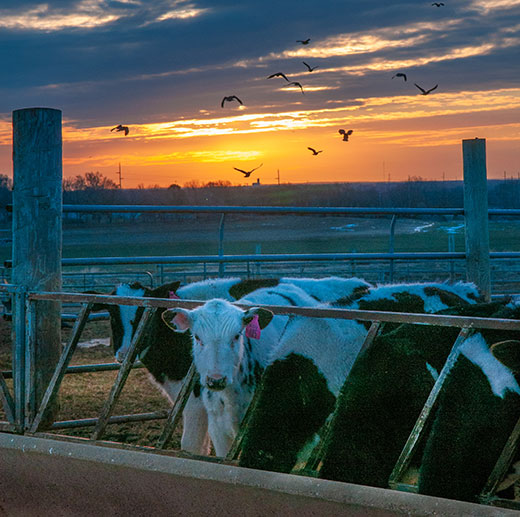 Got milk? Kansas dairies say yes, and plenty of it

Industry’s growth gets boost from extension, research at K-State

Note: A longer version of this story originally appeared in the K-State Ag Report, now available online at https://www.k-state.edu/agreport

MANHATTAN, Kan. -- When the Hilmar Cheese Company announced in May 2021 that it would be building a cheese and whey processing plant south of Dodge City, it marked another major success for the Kansas dairy industry.

Hilmar’s facility, which is expected to be operational in 2024, will create 247 new jobs. The project and associated dairy farms needed to supply the facility will bring an additional dairy farm and other support positions to the region. Hilmar officials said it represents more than $1 billion in investments to southwest Kansas.

“Dodge City was selected because it is a supportive agricultural region in close proximity to the local dairy industry,” said Hilmar’s chief executive officer and president David Ahlem.

But the bottom line is Kansas has been generating plenty of milk production over the past quarter century.

The Kansas Department of Agriculture reported in 2021 that the dairy industry had contributed $1.39 billion to the state’s economy along with 4,018 jobs when considering indirect and induced impacts.

Over the past 29 years, the Kansas cowherd doubled while milk production quadrupled, according to KDA data.

It begs the question: Why has this sector of the state’s agricultural industry exploded over the last three decades, and how did it happen?

“Abundant feed, ag-friendly policies and communities, and room to grow were the main factors in our move to Kansas,” said Ken McCarty, a 2005 graduate of Kansas State University’s Department of Animal Sciences and Industry, and who was still a teenager when his parents, Tom and Judy, moved the family’s dairy from Sugar Run, Pennsylvania to northwest Kansas in 1999.

Another factor, Ken McCarty adds, is location: “As my dad always tells us: ‘In Kansas, we are halfway to everywhere.’”

“What was really driving recruiting efforts is that we had the feed supply,” said George Blush, who was the dairy program inspection manager for the KDA from 1999 to 2018. “We had silage, we had corn; we had everything (dairies) needed readily available. There were a couple California dairies that came in and expanded their operations in Kansas. They said that within a few years, they could pay for a dairy just based on the cost (savings) they experienced in feed and transportation.”

Mike Brouk’s 24-year career as a dairy specialist for K-State Research and Extension has put him smack dab in the middle of Kansas’ dairy growth. He remembers the early part of his career when cow numbers were struggling: “That was a real low point,” he said.

While marketing efforts were getting dairy producers’ attention, K-State specialists went about doing what they do best: Brouk was involved in studies that aided cow comfort, including installing fans in barns and other heat abatement strategies. He worked on strategies to improve nutrition and forage quality, and to develop heifers that have been raised for several states and even for producers in Qatar.

Agricultural engineer Joe Harner, who retired in June 2022 after 40 years at K-State, was instrumental in designing facilities on Kansas dairies, including waste and water management systems that used sand to filter manure.

“If you look at work like Mike (Brouk) did with heat stress, everybody could adopt it,” Harner said. “Regardless of the size of operation, everyone could benefit from the work we were doing.”

“John Shirley (who retired from K-State in 2005) taught me how to do feed rations the right way,” said Brent Buessing, a 2003 K-State graduate who owns the 300-cow Buessing Dairy in Baileyville, Kan. “Because of what I’ve learned from K-State, I trust what I’m doing. I can run my rations much cheaper and still get excellent milk production.”

K-State’s dairy on the north side of its Manhattan campus is the “highest-producing dairy in the state,” according to Brouk, adding that the dairy is critical for helping K-State’s team implement practices that eventually help Kansas dairymen.

Russell Plaschka, the agribusiness development director for the Kansas Department of Agriculture, said K-State’s land-grant mission – providing objective, science-based information to the people of Kansas – “has played a critical role in growing agriculture in our state.”

The western side of Kansas has been preferred for the so-called mega-dairies – those with 2,000 cows or more. The eastern side of the state has been more common for smaller dairies.

Technology also has played a critical role the past 20 years, including systems that recycle water so that it is used multiple times on the farm; and automated milking systems – often called robotic milkers -- that allow cows access to the milking parlor 24 hours a day, seven days a week.

“We know that dairies in the area rely on K-State’s research to advance the industry,” Hilmar’s Ahlem said. “Research and education are critical as our industry progresses toward sustainability goals.”

Read more about the Kansas dairy industry’s success at https://www.k-state.edu/agreport/images/fall2022/AgReport_2022_web.pdf

The Kansas dairy industry contributed $1.39B and 4,018 jobs to the state's economy in 2021. Producers cite help from K-State extension staff and researchers as a key to the industry's growth.

"If you look at work like Mike (Brouk) did with heat stress, everybody could adopt it...Regardless of the size of operation, everyone could benefit from the work we were doing."