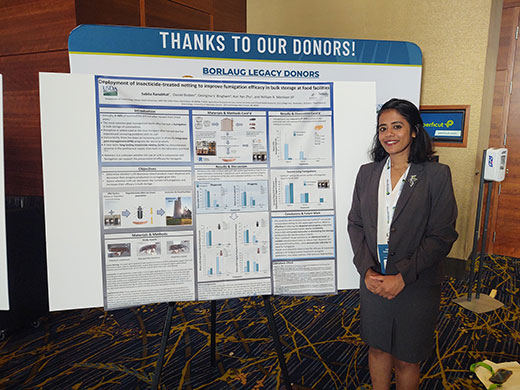 MANHATTAN, Kan. – A Kansas State University student has been honored by the prestigious Norman Borlaug Foundation for research that uses netting to reduce insect populations in stored grain, work that may contribute to global food security.

Rob Morrison, a K-State research entomologist who works for the USDA’s Agricultural Research Service’s Center for Grain and Animal Health Research in Manhattan, said the student poster session aimed to uncover projects that could help overcome “pervasive shocks to the global food system.”

He lauded Ranabhat for her tireless work and ability to communicate the relevance of the project.

“I believe this award is an acknowledgement of the important work that Sabita is doing in her dissertation, and her incredible aptitude in communicating it to a broader audience of policymakers, scientists, educators and growers,” said Morrison, who is one of Ranabhat’s advisors in her doctoral work.

Ranabhat’s research is evaluating whether long-lasting, insecticide netting can be combined with other pest management strategies at food facilities – such as fumigation – to improve the safety and bulk storage of grain.

While the work is still early, she says it appears as though insecticide netting can reduce the number of fumigations needed in storage facilities by 58% and even as much as 100%, while reducing the incidence of insects and their offspring.

Morrison pointed to additional findings indicating that in silos protected by insecticide netting, the level of damaged grain was reduced by 97% to 99%.

In the past, methyl bromide and phosphine were commonly used to control insect populations. Methyl bromide can no longer be used due to its negative impact on the Earth’s ozone layer; and insects are gradually building resistance to phosphine fumigants.

Insecticide netting is used to cover vents and other openings in storage facilities, or otherwise keep them away from grain.

“A huge benefit of this tactic is that it confines insecticide use to the net and away from the commodities,” Ranabhat said. “However, we don’t know whether the use of insecticide netting can reduce fumigant use (and) preserve them as a last resort. So, I am evaluating whether we can use insecticide netting to improve the effectiveness of fumigation.”

Globally, farmers lose as little as 2% but sometimes as much as 50% of their harvested crop in storage, marketing and processing from stored product insects, which Ranabhat notes causes $100 billion in economic losses.

Insecticide netting, she adds, is one solution that responds to consumers’ demands for low or no insecticide residues in stored grain after harvest, and contributes to researchers’ goal to diversify integrated pest management programs for stored products.

Of the Norman Borlaug student poster award, Ranabhat said: “I am very happy and honored to win the grand prize. The recognition boosts my motivation further … and ultimately encourages me to achieve my long-term academic and career goals to help alleviate global food insecurity through effective insect pest management and sustainable agriculture.”

Sabita Ranahbat's research is evaluating whether insecticide netting can be combined with other pest management strategies at food facilities – such as fumigation – to improve the safety and bulk storage of grain.