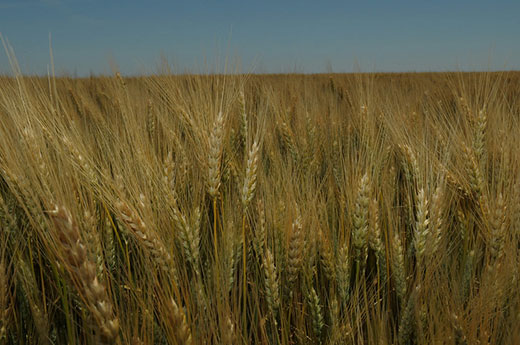 The compound effects of hot, dry, windy events account for a 4% yield reduction in Great Plains wheat, according to a K-State study published in Nature Communications.

MANHATTAN, Kan. – Kansas State University researchers have published a study in the prestigious scientific journal, Nature Communications, quantifying the negative impacts that the triple punch of heat, drought and wind has had on wheat yields in Kansas and the surrounding region over the past 40 years.

Their findings are the first to quantify a connection between changes in the nation’s climate and wheat production in the U.S. Great Plains – which spans South Dakota, Nebraska, Colorado, Kansas, Oklahoma and Texas.

Xiaomao Lin, a professor of agricultural climatology and a state climatologist in K-State’s Department of Agronomy, said from 1982 to 2022, the number of hot-dry-windy events – known as HDW – “significantly ramped up in the U.S. Great Plains.”

“The HDW events were the most impactful drivers for winter wheat loss, accounting for a 4% yield reduction per 10 hours of hot-dry-windy events during wheat’s heading to its maturity stage,” Lin said.

“In the simplest terms, we employed a statistical model that took the per-county winter wheat yields and broke them down to see how their variations and trends over almost 40 years aligned with various combinations of hot, dry and windy events during different plant growth stages, years, locations, the combined improvements of crop breeding and in-field agronomic management, and more,” said Steve Welch, a professor of theoretical plant modeling in K-State’s Department of Agronomy.

He adds: “Once the model split these effects apart, it was possible to see what portions were associated with each of them, in particular, simultaneous hot-dry-windy events. The result is that the HDW effect was negative – meaning there were yield losses (in Great Plains wheat production) -- and becoming more so.”

Haidong Zhao, a doctoral student in K-State’s Department of Agronomy and the article’s lead author, said the effect of HDW events “are strongly associated not only in specific years but also in locations across the U.S. winter wheat belt, particularly those areas associated with the 1930s Dust Bowl.”

Lin said the HDW events in the Great Plains were “atmospherically bridged” with the Pacific Decadal Oscillation signal. “This finding is extremely valuable,” he said, “because it might provide avenues for predicting risks to winter wheat yields in the U.S. Great Plains at decadal (10-year) time scales.”

The article in Nature Communications includes 14 researchers who initially set out to study whether HDW events had, indeed, increased in the U.S. Great Plains – and whether current conditions could be likened to the unprecedented Dust Bowl of the 1930s.

“As climates change, temperature and precipitation are heading in opposite directions over the U.S. Great Plains,” Lin said. “Irregular droughts and expanded croplands are driving growing environmental problems, such as frequent dust storms and the increased breakdown of plastics that farmers use on their fields. Greenhouse gases are making heat waves more frequent.”

Mary Beth Kirkham, a University-Distinguished Professor in Agronomy, added that Kansas, western Oklahoma and the Texas Panhandle are the most windy inland areas in the continental U.S., and the windiest months are March, April and May – critical periods for grain-filling in winter wheat.

“Dry conditions, combined with heat waves and windy events, have a significant, negative impact on crop yields, livestock production and pasture conditions,” Lin said. “This impact will be even worse under an unprecedented changing climate in the mid-term (up to the year 2050) and long-term (up to 2100).”

Farmers in Kansas and other affected areas should know that climate change is affecting their crop yields, he said, and compound extreme events are projected to increase in intensity, frequency and duration all over the world.

“Future climate change threats will depend on greenhouse gas emissions and pathways that are implemented to mitigate them, such as burning less fossil fuel and adjusting climate-informed planting dates and cultivars,” Lin said. “Also, it will be important to develop climate-resilient agricultural practices, such as finding drought-resistant wheat cultivars and disseminating knowledge-based supporting systems – such as high-quality, short-term agricultural climate forecasting information.”

Nature Communications is considered one of the country’s most highly regarded peer-reviewed scientific journals. According to its website, the journal receives approximately 50,000 submissions per year, and only 7.7% are accepted for publication.

Raj Khosla, head of K-State’s Department of Agronomy, called the study “a testament of complex, multi-disciplinary work our faculty are accomplishing to assist our farmers in understanding wicked climate patterns and challenges related to climate, and how they can prepare themselves and their operations to respond to such challenges.”

“The (hot, dry, windy) events were the most impactful drivers for winter wheat loss, accounting for a 4% yield reduction per 10 hours of hot-dry-windy events during wheat’s heading to its maturity stage,”