SDI in the Great Plains​

Use of subsurface drip irrigation with lagoon wastewater 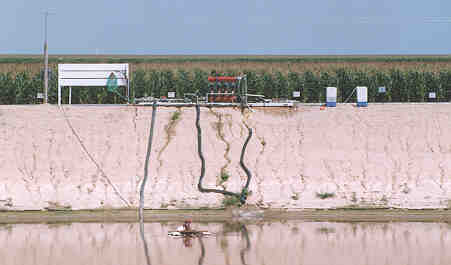 The experiment site as viewed from across the lagoon. Electrical controls are located on the reverse side of the mounted white panels. The floating pump is shown in the lagoon. Water is pumped up the hose on the left. A booster pump adds pressure. Excess wastewater volume returns to the lagoon in the middle hose. The hose on the right is also return flow to the lagoon and is used only for testing. After wastewater passes through the disk filter (red), it enters a manifold and is directed to individual corn plots in the background. The blue and white injection pumps and tanks for acid and chlorine are shown on the right.

Use of subsurface drip irrigation (SDI) with water from animal waste lagoons has many potential advantages. They include but are not limited to less human contact with wastewater; no runoff of wastewater into surface waters; placement of phosphorus-rich water beneath the soil surface where it's less prone to runoff; greater application uniformity resulting in better control of the water, nutrients, and salts; less irrigation system corrosion; fewer climatic application constraints (especially high winds and low temperatures); and greater flexibility in matching field and irrigation system sizes.

The very small emitters in the SDI system may be prone to clogging by the various constituents of the wastewater. The challenge of using SDI with wastewater, then, is to prevent emitter clogging. Given that challenge, the objective of this project was:

Measure the performance of five different dripline types as affected by irrigation with filtered but untreated water from a beef feedlot runoff lagoon.
Methods

This project was conducted at Midwest Feeders, Ingalls, KS.

The driplines were installed in April 1998. Dripline spacing was 60 in, depth was approximately 17 in. Each plot was 20 ft wide (4 driplines) and 450 long. The system installation was completed and the first wastewater was used for irrigation on June 17. Each dripline type was replicated three times and there were two border plots for a total of 17 plots.

The wastewater was filtered with a disk filter sized according to filter manufacturer recommendations. A controller was used to automatically backflush the filter after every hour of operation or when differential pressure across the filter reached 7 psi. Acid and chlorine were also injected into the system on July 9, July 27, August 4, August 31, September 4, October 6, and November 17 to help keep bacteria and algae from growing and accumulating in the driplines. Acid was added to reduce the pH to approximately 6.3. Driplines were flushed on August 4, September 2, October 6, and November 17.

To test the system, irrigations of 0.20 to 0.40 in were applied daily until crop maturity. Each plot received the same amount of water daily and for the growing season. Nearly 21 in of wastewater was applied from June through early September. This amount is in excess of the typical crop water requirement but allowed a more thorough test of the SDI system. Following harvest, the system was allowed to stand idle for two periods, followed by system flow testing each time. The first idle period was 32 days and the second was 41 days.

After completion of the system, the lagoon wastewater was the only water applied with the SDI system. No clean water was used for irrigation, flushing, or dripline chemical treatment.

Emitter flow rates for entire plots were measured weekly. Pressure gauges at the head and tail end of the plots were used to measure the pressure within the driplines. Totalizing flow meters measured the amount of wastewater flow for each plot. Flow rates were measured by hand-timing the flow to each plot.

Of the five dripline types tested, the three largest emitter sizes (0.4, 0.6, and 0.92 gal/hr/emitter) showed little sign of clogging. Their flow rates at the end of the season were within 2% of their flow rates at the beginning of the season, indicating that very little emitter clogging had occurred (Fig. 1). The absence of emitter clogging and resultant flow rate decrease indicates that emitters of these sizes may be adequate for use with lagoon wastewater. 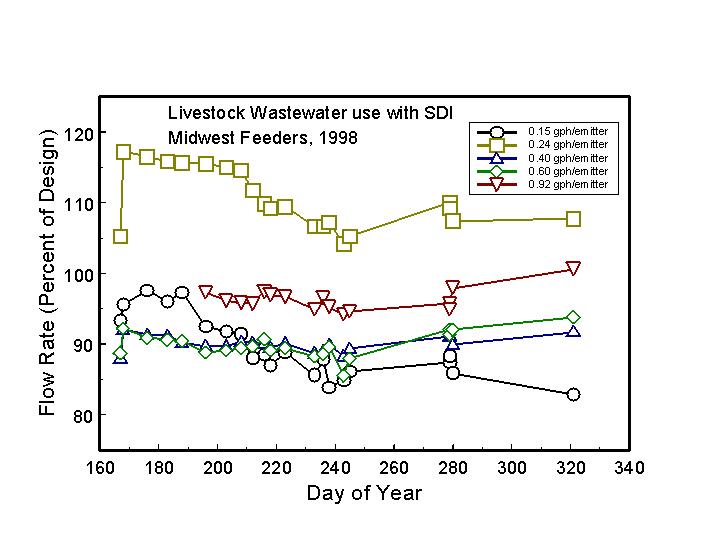 Figure 1. Plot flow rates as percent of design flow rate through the test.

The disk filter and automated backflush controller operated well in 1998. Based on our observations, the hourly backflushes were adequate to prevent excessive differential pressure accumulation and the set point of 7 psi was never reached.

These results show that SDI has potential for use with lagoon wastewater. It appears that the smaller emitter sizes normally used with groundwater in western Kansas may not be appropriate for use with lagoon wastewater, however. These smaller emitter sizes may be prone to clogging when used with wastewater. The results of this study, while very encouraging, should be considered preliminary. Questions still remain about the long term, multi-season performance of SDI systems using livestock wastewater. Long-term performance will probably be necessary to justify the higher investment costs of SDI systems.

We thank Midwest Feeders for providing the site, wastewater, and assistance with the project. We also thank the numerous companies that donated irrigation products and services in support of this project. Funding for the project was recommended by the Governor's office, approved by the Kansas legislature in 1998, and administered through KCARE at Kansas State University.