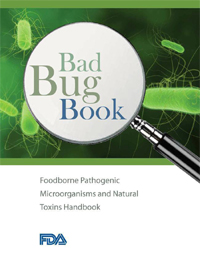 Campylobacter is not a new bacteria. A known cause of disease in animals, scientists in the 1970's conclusively proved that this bacteria is a cause of human illness as well. Learn more about this foodborne bacteria in the information below.

Clostridium botulinum is an anaerobic organism and, therefore, prefers environments like those found in a sealed jar or in a large container of thick food in which the freely available oxygen has been driven off through heating. C. botulinum can cause the severe foodborne illness, botulism. For more information on this microorganism, see the web sites below.

Escherichia coli O157:H7 causes foodborne illness with an estimated 73,000 cases of infection and 61 deaths that occur in the United States each year. Infection often leads to bloody diarrhea, and occasionally to kidney failure. Most illness has been associated with eating undercooked, contaminated ground beef. Person-to-person contact in families and child care centers is also an important mode of transmission. Infection can also occur after drinking raw milk and after swimming in or drinking sewage-contaminated water. The web sites below provide in depth information for this microorganism.

Listeriosis, a serious infection caused by eating food contaminated with the bacterium Listeria monocytogenes, has recently been recognized as an important public health problem in the United States. The disease affects primarily pregnant women, newborns, and adults with weakened immune systems. It can be avoided by following a few simple recommendations.

Some molds cause allergic reactions and respiratory problems. And a few molds, in the right conditions, produce "mycotoxins," poisonous substances that can make people sick. When you see mold on food, is it safe to cut off the moldy part and use the rest? To find the answer to that question, delve beneath the surface of food to where molds take root.

Noroviruses are a group of viruses that cause the "stomach flu," or gastroenteritis, in people. Learn more about this foodborne virus below.

Parasites may be present in food or in water and can cause disease. Ranging in size from tiny, single-celled organisms to worms visible to the naked eye, parasites are more and more frequently being identified as causes of foodborne illness in the United States. The illnesses they can cause range from mild discomfort to debilitating illness and possibly death.

This foodborne illness occurs by consuming undercooked or raw pork products. An example is chitterlings. Another source is unpasteurized milk or untreated water. Here is more information on this illness.

Zoonotic diseases are those that pass from species to species, such as animal to human. This could be from a pet, wild animal or even transferred through a water source.