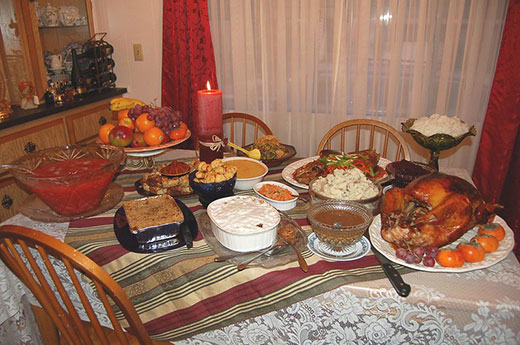 From Halloween through the Superbowl, the temptation to indulge in high-calorie foods is high. Make a plan to enjoy these foods without over-doing it. (File photo)

From Halloween to the Superbowl, the temptation to over-indulge is high

MANHATTAN, Kan. – Americans are about to enter the food and party marathon.

Kansas State University family and consumer sciences specialist Sharolyn Jackson said Halloween kicks off a more than three-month span – ending with the Superbowl – in which the temptation to over-indulge is high.

“We are constantly making food decisions and we don’t always have control of those decisions,” Jackson said. “Sometimes people that we work with bring foods in that tempt us and we aren’t prepared for. We have events and dinners and parties and we don’t always know what type of food will be served, so it’s hard to plan ahead.”

Listen to an interview by Jeff Wichman with Sharolyn Jackson on the weekly radio program, Sound Living

The coronavirus pandemic may alter holiday gatherings this year, but one thing is unlikely to change: Food will almost certainly be a focal point.

Jackson notes that, on average, Americans gain one to two pounds during the holidays, though some may gain five times that much.

“That in itself is concerning, but also they’re not losing that weight after the holidays,” she said. “It just accumulates year after year, and over time, that has a real negative effect.”

Jackson said there are three keys to staying healthy through the marathon:

All three, she said, are equally important.

“Physical activity is something that you need to put in your schedule so that it’s more apt to happen,” she said. “It doesn’t have to be the same type of physical activity routine that you have the rest of the year. Maybe it’s for a shorter amount of time, but make sure you are not getting out of the habit.”

One idea is to incorporate walking with shopping: “Do five laps inside the mall or down the block before doing your shopping; maybe do some window shopping while you walk around. Or, check out what stores are there.”

In addition to cardiovascular strength, Jackson said walking or other similar activity helps to reduce stress often associated with the harried pace of the holidays.

As for holiday parties and dinners, Jackson said “we all struggle with those.”

“Make a plan before you go. Maybe you will start with fresh vegetables or things that are lower in calories. Go for the non-calorie beverages first, such as water, iced tea or even diet soda.”

Jackson also suggested taking a smaller plate, especially in buffet lines, that encourages taking less food. Take a look at what’s on the buffet before you starting filling your plate so you can plan your plate accordingly.

“And eat slowly,” Jackson said. “Often times we’re so geared up and wanting to eat fast. Try to savor each bite. Before you go back for seconds, wait 10 minutes so that your stomach has a chance to signal to your brain that you are full, if indeed you are.”

Jackson said healthy eating can also be guided by what has been called the ‘enjoyment curve.’

“It’s not research-based, but it makes really good sense to me,” she said. “There’s a point where we just keep eating and eating because it just tastes so good and we’re enjoying it. Then there’s a point where we’ve just gone too far. We’ve pushed that enjoyment curve to where it’s not enjoyable any more, and in fact you might be miserable.

“Think about eating your meals based on the enjoyment curve and stop when it’s no longer enjoyable. That is a strategy that can help people to not over-do it.”

More information on food and nutrition is available online from K-State Research and Extension.

Celebrating the holidays during a pandemic

K-State Research and Extension family and consumer sciences specialist Sharolyn Jackson said celebrating the holidays this year may be different for families while navigating the challenges of the COVID-19 pandemic.

“In times like this, a special food can be a source of comfort,” Jackson said. “For example, preparing the cranberry salad that Aunt Betty always brought to the holiday meal might help you feel closer to her even though you are not together in the same physical space this year.”

Jackson said keep in mind that celebrations involve more than food. “Approach the holiday season with the intent to experience it with your senses,” she said.

“Christmas, in particular, is a carnival for the eyes with twinkling lights and beautiful colors. Learn to appreciate the sounds and fragrance of each holiday season. Be mindful and aware of how things feel by using your sense of touch.”

Make a plan to stay active and to eat healthy before taking part in the holiday food and party marathon.

“Physical activity is something that you need to put in your schedule so that it’s more apt to happen,” she said. “It doesn’t have to be the same type of physical activity routine that you have the rest of the year. Maybe it’s for a shorter amount of time, but make sure you are not getting out of the habit.”