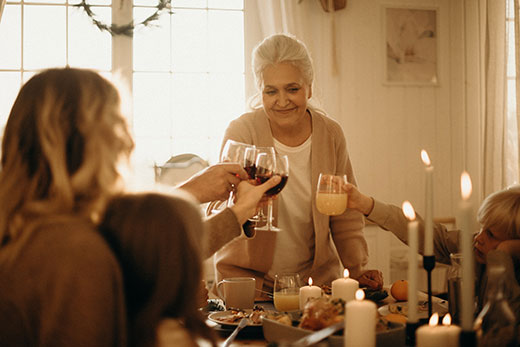 Family celebrations may be smaller this year, but can still be joyful.

Procter encourages Kansans to consider donating to a food pantry

That includes the number of people eating dinner together, and where they eat it. OnePoll reports that 30% of Americans plan to host only their immediate family this year – up from 18% doing so in 2019 – while food giant Butterball notes that one-third of U.S. families are considering serving dinner outdoors.

Americans are not ready to give up traditional foods, but that may require some pre-Thanksgiving planning to adjust the size of the meal, according to Kansas State University nutrition specialist Sandy Procter.

“When you think about the traditional dishes that mean so much when you get together, you can scale those up or down,” she said. “One of my classic recipes is the stuffing. I’m very careful not to stuff the turkey with it because of the food safety concerns, so I make it in a crock pot, which works really well, because then I have more oven space.

“There are a variety of sizes of crock pots. I can certainly decrease the amount of ingredients but still keep a favorite food on the table.”

Listen to an interview by Jeff Wichman with Sandy Procter on the weekly radio program, Sound Living

Procter noted that leftovers – which generally are preferred fare in the days following the holiday – won’t necessarily be eliminated if you cook less. “But instead we will leftover from a meal of four, instead of a meal for 16,” she said.

Another option, Procter said, is to cook usual quantities and make a careful plan to freeze meals ahead.

“What I like to do when I have leftovers is leave them in a variety of forms so I can pull them from the freezer,” Procter said. “I might have some slices or cubes (of turkey, for example) that can be used for soup, stew, pot pie or mixed dishes.”

Procter said she has developed another idea to help her own family get in the spirit of Thanksgiving.

“Instead of trying really hard to cut down the recipes in my head, I am considering purchasing the volume of canned and dried ingredients that I would normally buy, keeping what I need for my small meal, then contributing the rest to a food pantry,” she said.

Because of social distancing, people likely won’t be getting together in large groups, so many community meals may be cancelled – leaving it up to food pantries to provide food for needy families.

Procter encouraged consumers to contact the pantry in their community to learn about local needs. She also suggested buying healthy canned goods – such as fruit packed in juice or light syrup, or low-sodium vegetables – for the local pantry. Cash contributions can help pantries supply such perishable foods as produce and milk, she said.

“This may not be the same Thanksgiving dinner with people around your table that we all are used to,” Procter said, “but we can help someone else to have a better holiday experience.”

More information on guidelines for safe holiday gatherings is available from the U.S. Centers for Disease Control and Prevention. More tips for healthy eating also are available online from K-State Research and Extension.

The pandemic has forced many families to make the difficult decision to downsize their Thanksgiving get-togethers this year.

“When you think about the traditional dishes that mean so much when you get together, you can scale those up or down.”