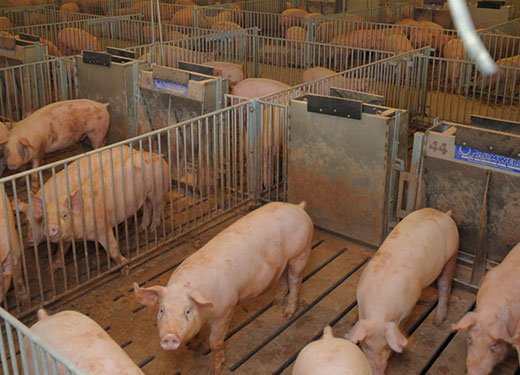 “Wheat is an excellent feed grain for swine, but usually is not competitively priced with corn in the United States,” said Mike Tokach, a swine nutritionist with K-State Research and Extension. Wheat, he noted, is more traditionally part of swine diets in Canada, Europe and Australia.

In most situations, corn and sorghum are less expensive grain sources in the United States. Lower prices for wheat – as well as corn’s higher demand for export and ethanol markets – has vaulted wheat to being the more economical option.

“As long as diets are balanced, wheat can replace all or part of the corn in swine diets without affecting growth performance,” Tokach said.

Tokach noted that the concentration of starch and fiber in wheat is similar to corn, though wheat contains significantly less oil and thus is lower in energy content (91% to 97% relative to corn, according to industry research).

But wheat does offer greater values for crude protein, phosphorus and amino acid content, particularly lysine, threonine and tryptophan; and the ileal digestibility of the amino acids is “relatively high and similar to that in corn,” according to Tokach.

“Because wheat is lower energy than corn, feed efficiency will be a little worse with wheat unless fat is added to balance the diets for energy,” Tokach said. “But even with the change in feed efficiency, wheat is economical at the current time.”

He added: “When wheat is used, less soybean meal and more feed-grade lysine can be used in the diet, which also favors the economics for wheat. These advantages will lower the feed cost per pig if wheat is used at the current time.”

More information on swine nutrition is available online from K-State Research and Extension. Producers are also encouraged to contact their local extension agent.